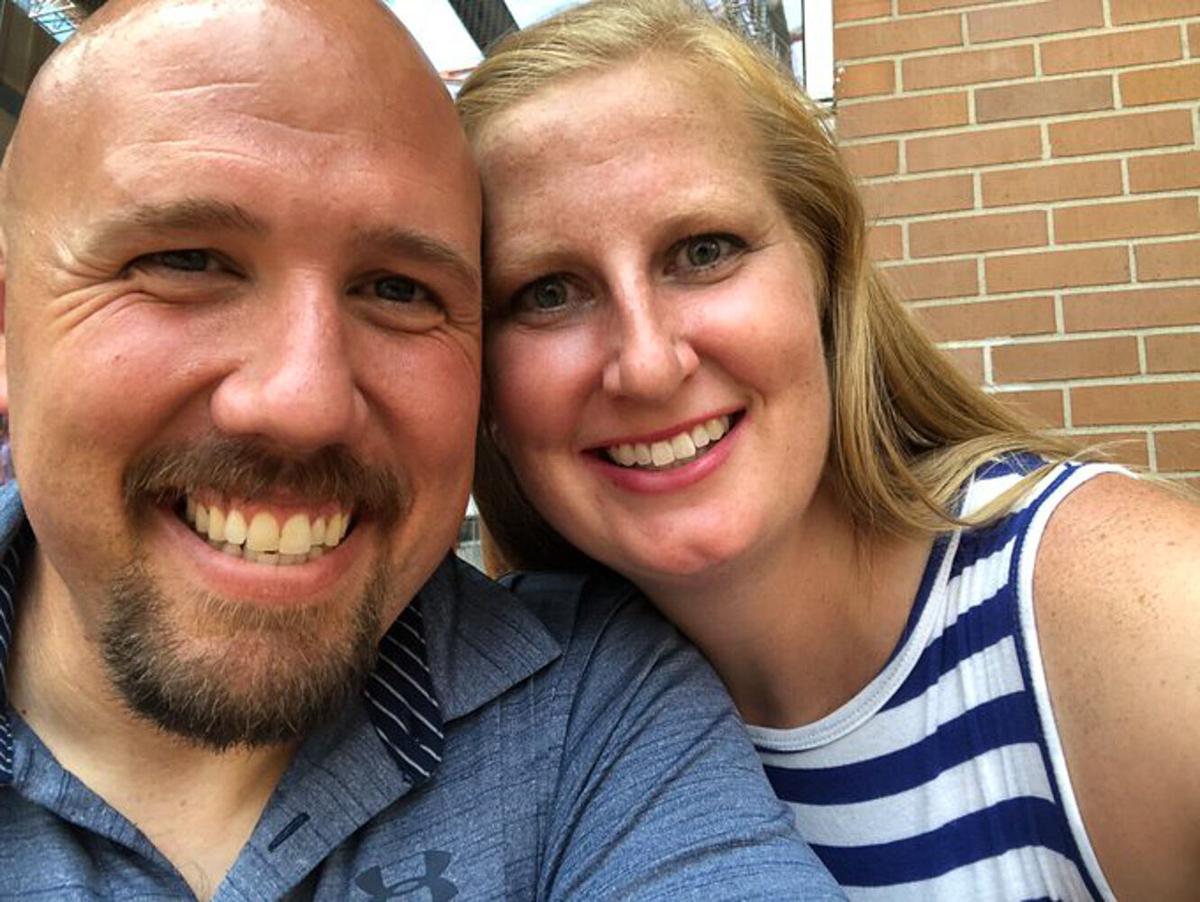 Kellen and Megan Laws are a married couple who both had one of the best seasons of all time in their respective coaching careers. Kellen is an assistant wrestling coach for Liberty, which won the state championship in February of 2020 with one of the highest team point totals ever. Megan is an assistant coach for Liberty North volleyball, which went undefeated on the way to a state championship in fall of 2020. 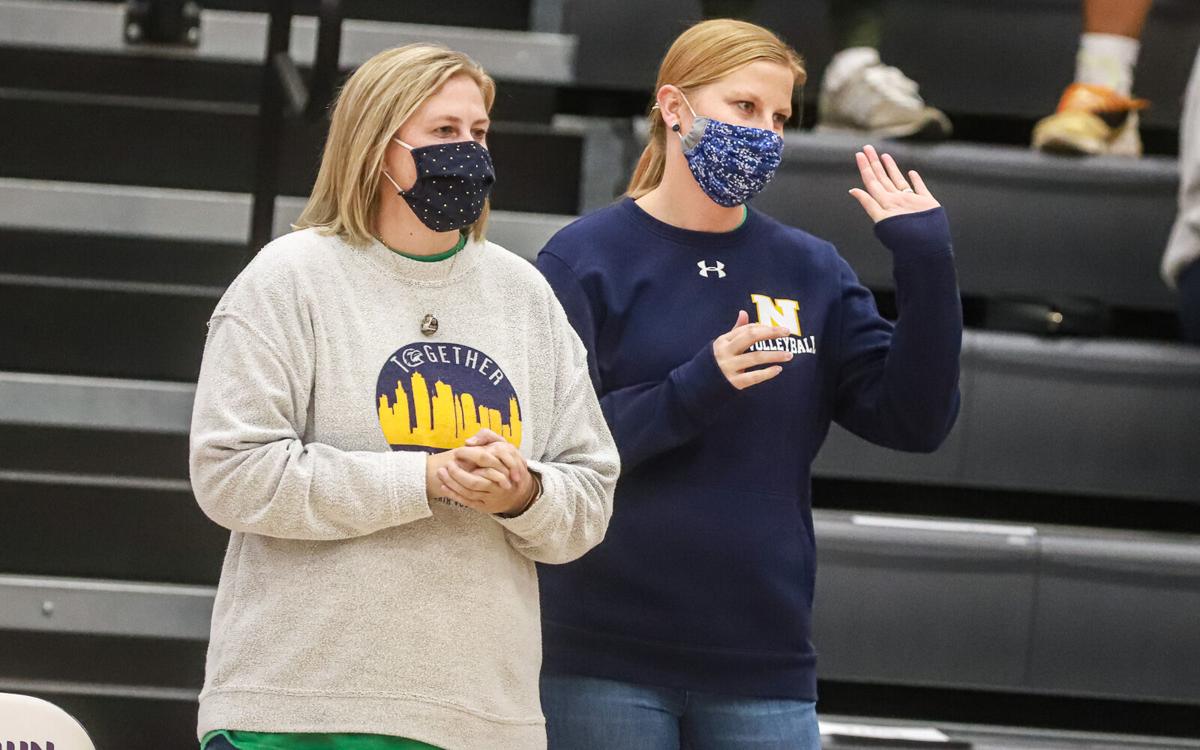 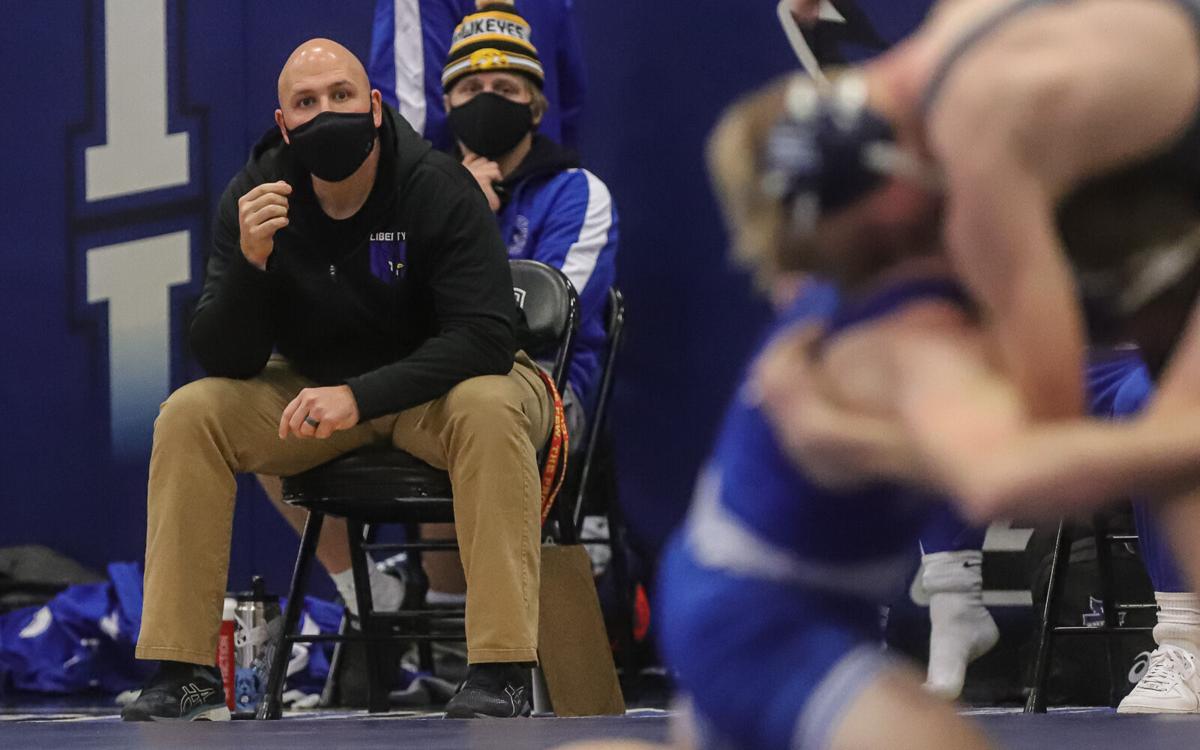 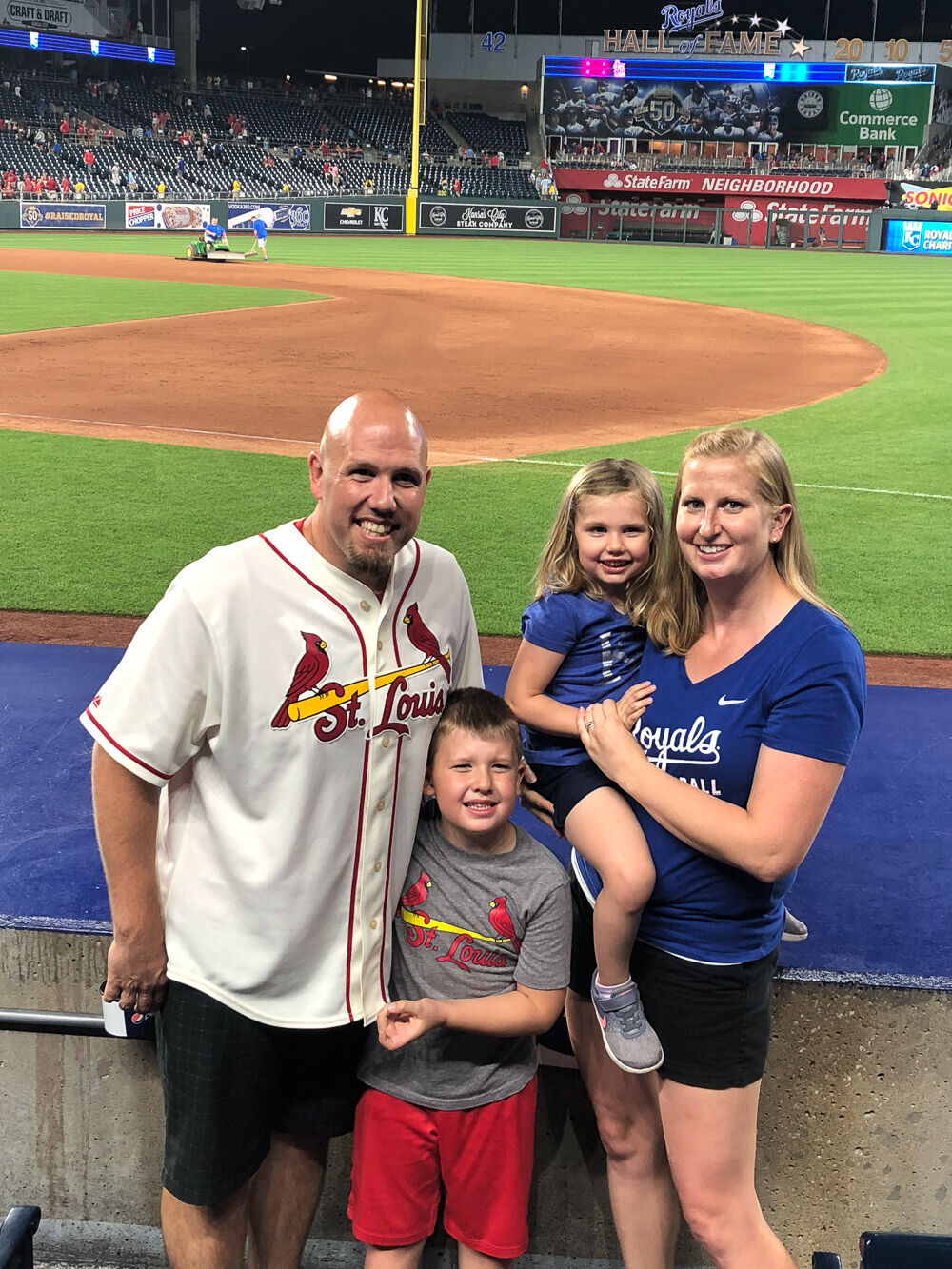 Kellen and Megan Laws with their children Kyler and Gracyn at Royals game, although the boys are sporting their St. Louis Cardinals gear in August 2018 at Kauffman Stadium. 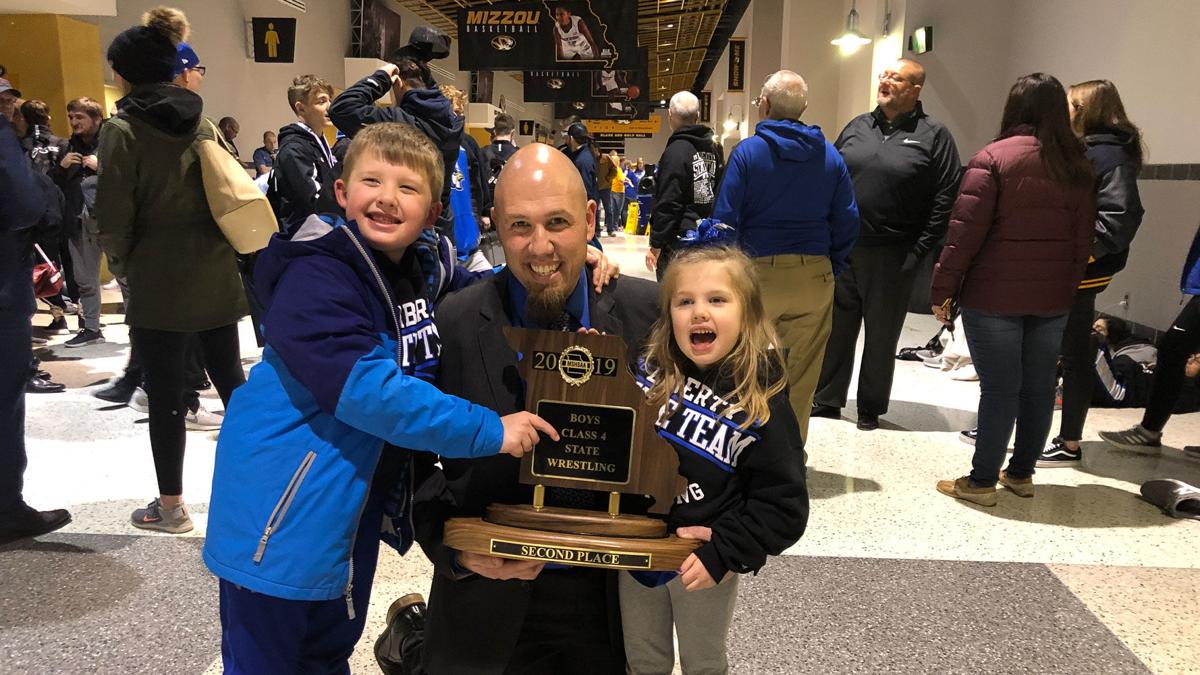 Kellen Laws receives hugs from his children Kyler and Gracyn after the Liberty boys wrestling team wins the state championship in February 2020. 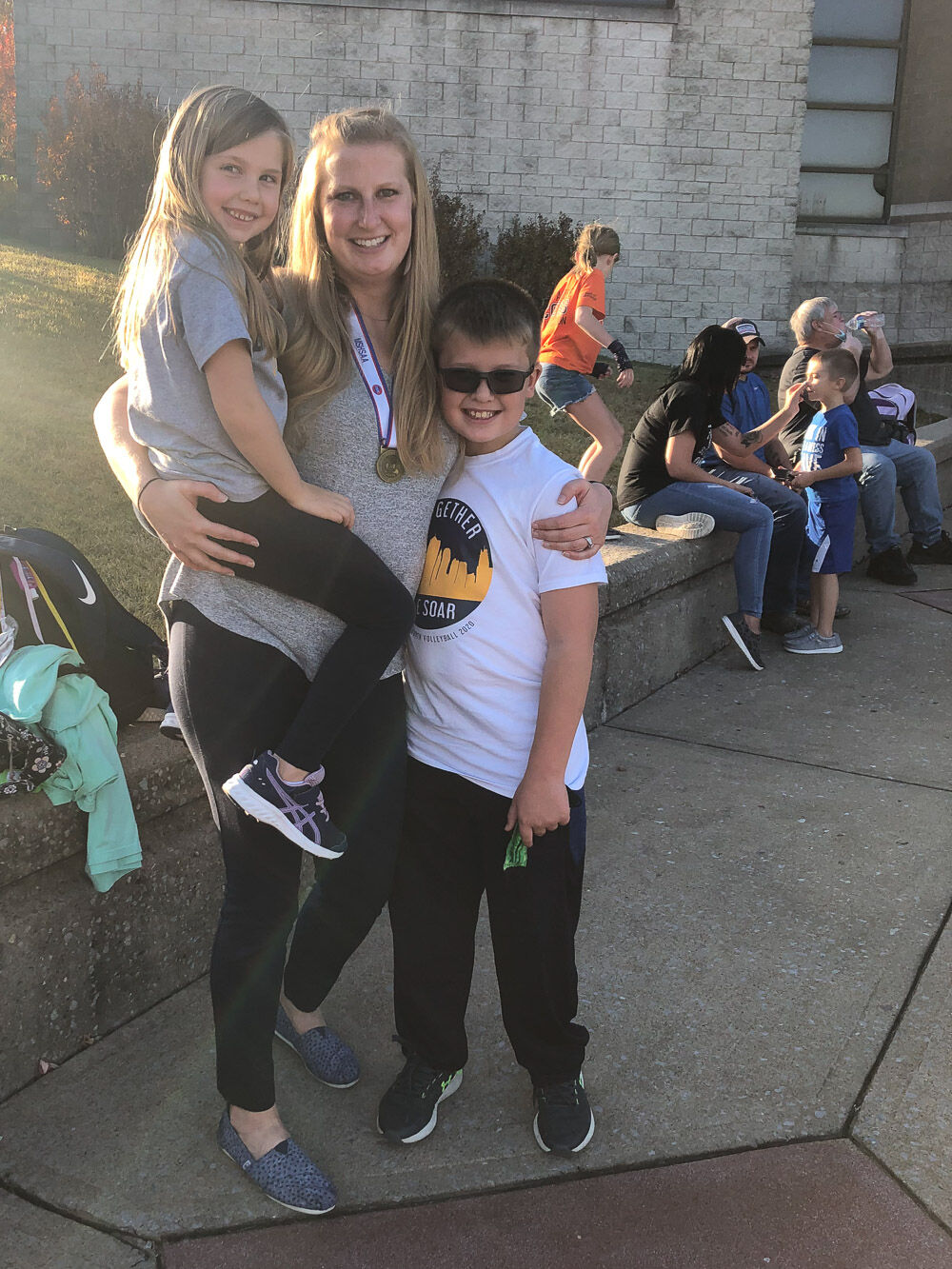 Megan Laws holds her daugter Gracyn and hugs her son Kyler while posing for a photo. 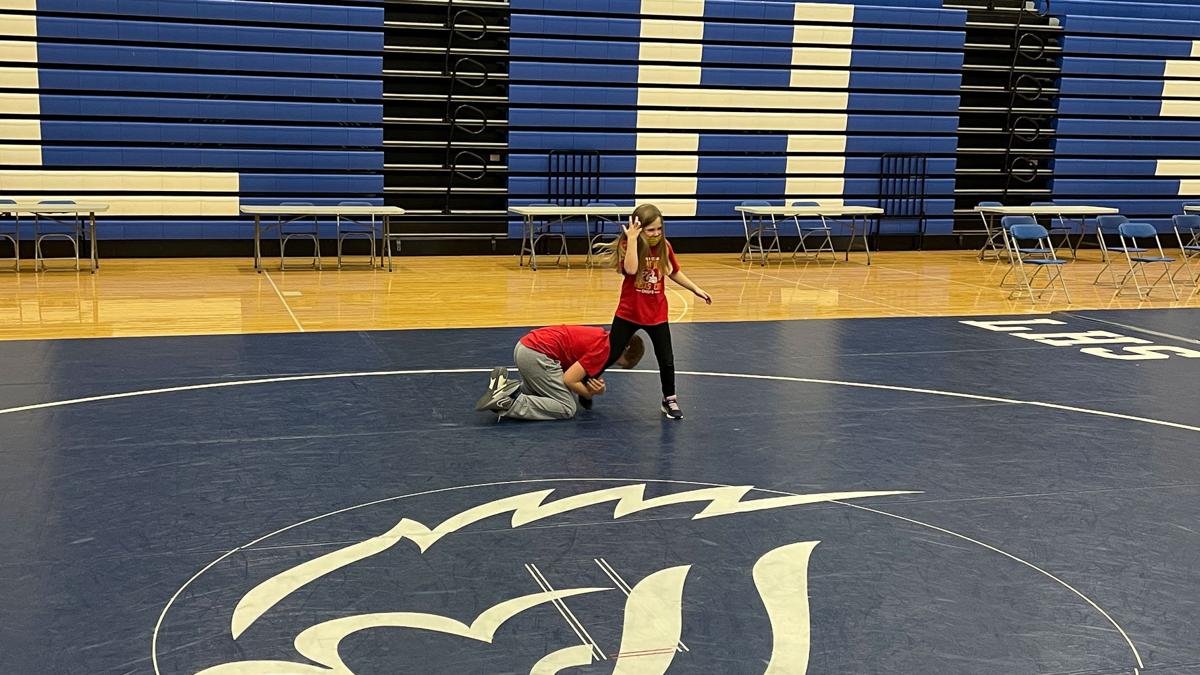 Kyler Laws shows off his new wrestling skills on the mat as he maintains control of his sister Gracyn's leg.

Kellen and Megan Laws are a married couple who both had one of the best seasons of all time in their respective coaching careers. Kellen is an assistant wrestling coach for Liberty, which won the state championship in February of 2020 with one of the highest team point totals ever. Megan is an assistant coach for Liberty North volleyball, which went undefeated on the way to a state championship in fall of 2020.

Kellen and Megan Laws with their children Kyler and Gracyn at Royals game, although the boys are sporting their St. Louis Cardinals gear in August 2018 at Kauffman Stadium.

Kellen Laws receives hugs from his children Kyler and Gracyn after the Liberty boys wrestling team wins the state championship in February 2020.

Megan Laws holds her daugter Gracyn and hugs her son Kyler while posing for a photo.

Kyler Laws shows off his new wrestling skills on the mat as he maintains control of his sister Gracyn's leg.

Megan Laws is not concerned with Valentine’s Day.

As the wife of a wrestling coach, she knows that the annual day to celebrate love is a floating holiday, the date of Feb. 14 merely a suggestion.

Last year Megan and her family were in the stands at Staley High School as her husband Kellen, an assistant coach for the Liberty wrestling team, began the yearly trek of battling toward the state tournament.

Wrestling coaches and their spouses generally work around it. Couples like the Laws find a different date that has the added benefit of avoiding the crowded restaurants found on V-Day. There are also other celebrations that get pushed back, such as Kellen’s mom’s birthday.

“She knows that she’s not going to get a birthday card until the state tournament,” Kellen said. “That’s when she gets a card from the kids and everybody. She’s like, ‘I understand.’ She’s been around it since I was in school.”

This year has the extra delay of a sectional tournament added to limit the number of teams at each event during the pandemic, with state getting pushed back into March.

Luckily for Kellen, his mom and his wife both understand. Megan said she’s truly not bothered by where those priorities stack up.

“I didn’t grow up with Valentine’s as being a big thing in my household,” Megan said. “We celebrate it sometimes after the season, or I get an IOU. One year, he did concert tickets or something and we went later in the spring.”

But maybe the most important part of making it work is that value placed on wrestling season simply tips the scale back from where it is in the fall when Megan is locked into being an assistant coach for Liberty North volleyball.

Not only can they relate to the workload that comes with being the spouse of a coach, they knew what they were in for from the moment they met.

Both were finishing up their college degrees and planning to pursue coaching after graduation when they met through mutual friends back in April 2006.

Kellen was celebrating his birthday by catching a St. Louis Cardinals game with a coaching buddy. Megan was visiting a former teammate of hers.

Those mutual friends introduced them. Those two also ultimately got married with Kellen and Megan in the bridal party, and that couple did the same when the Laws got married in 2008.

Kellen and Megan were both heading in the same direction after college, literally and figuratively. Kellen took a coaching and teaching position at Springfield High School. Megan took a graduate assistant position with Southwest Baptist University.

Megan would end up getting a full-time volleyball assistant coaching job at Missouri S&T while Kellen had his sights set on a Waynesville job that was 30 minutes from his then-fiancee. Thankfully, as Megan describes it, the head wrestling job at Rolla High School opened up.

They got married in June, staying in Rolla for four years until their first child Kyler was born. The Laws thought their coaching schedule would be too hectic while caring for their son, particularly with the strains of Megan’s travel schedule with a college team.

“If we had family that was right there in Rolla, it might have made a bit of a difference,” Megan said.

So the Laws moved to Kansas City in May of 2012, living with Megan’s parents for about nine months while they waited for the economy to shape up for their housing search. Megan started teaching at Kearney and became the volleyball head coach.

During this time, Kellen had a few different teaching and coaching jobs in the KC metro area until Dustin Brewer became the head coach at Liberty. Kellen gave Brewer a call because the Laws were living in Liberty at the time and just had their second child, daughter Gracyn.

He knew that the job would cut an 1-hour round trip out of his daily schedule. He also knew that there was the chance to build something special, although maybe not quite to this level.

“I didn’t really know at the time it would go something like this, like the kind of run that we’ve been on here in the last five years,” Kellen said.

Kellen worked alongside Brewer as the Liberty program elevated to being a Missouri contender to a nationally-ranked powerhouse. The Blue Jays cemented that status when they dominated the 2020 Class 4 tournament by earning a state championship.

The success did not come without sacrifice.

Megan stepped down from being the head coach at Kearney in 2018 so she could spend more time with the kids.

“The kids were just getting old enough and I just needed a change,” Megan said.

She said that she had come to terms with the idea of just teaching and not being a coach anymore.

But her good friend Katie Dowden, who is the Liberty North head volleyball coach, kept “bugging” her about how they had an opening for an assistant coach. Megan was hesitant at first, but she eventually gave in to Dowden’s coaxing efforts.

It turned out to be a great decision as she helped build up a Liberty North squad that looked poised to win a district title for the first time in the program’s history.

But for all the friction Kellen avoids thanks to Megan’s feelings about Valentine’s Day plans, the couple more than makes up for it with the competitiveness they display as coaching spouses.

Kellen received a state championship ring in July, delayed after the COVID-19 concerns pushed the ceremony back. Megan told her volleyball players that his head was “about this big” as she gestured to a size that could not fit through a doorway.

Not only did she and her teammates follow through by delivering a state title, they made their own historical feat by going undefeated.

Kellen is excited to see what his team does in the next month to keep this competition between spouses going.

He said that sweeping the wrestling state tournament the same way that Eagles volleyball did through the final two rounds of their run is not likely. He’s hoping that a blossoming girls wrestling team might give him an edge in the years to come.

“We have friends that are across the state that coach wrestling and you know, some of them have good boys programs, but then they have really good girls programs,” Kellen said. “And it’s like, I want one of those.”

Kellen started to speculate on what it would mean if he was a part of the first Missouri wrestling program to win both the boys and girls title in the same year, but Megan finished his thought for him.

The rivalry is mostly talk though as Kellen and Megan have become intertwined with the lives of players, coaches and family members on each other’s teams.

Kellen says he gets more grief from his coworkers if he sports a Liberty North shirt or tweets out a #EAG in support than Megan receives from Dowden and company for committing the inverse with a Liberty or "Wolfpack" wrestling shirt.

But there is still a line in the sand that goes back to when they met in St. Louis all those years ago. Megan’s connection with Kellen was not related to the Cardinals gear that he was sporting on that trip, as she grew up a Royals fan.

Both parents said that the children joining in on the competitive spirit was a natural progression that has not required much push from them.

Kyler already loves football and baseball while just now giving wrestling a try. Gracyn takes dance one night a week and played soccer last fall, which Megan said is a “curveball” that she’s fine with. Both are interested in playing basketball, but COVID-19 has helped shelve that until next winter.

Kyler is taking after his dads love of rocking the Cardinals' red. Gracyn follows her mother's choice of sporting the Royals' blue.

If the Liberty girls wrestling program indeed gives Kellen a state championship ring for a second time, basketball might be where Megan goes to even the score as that’s what she played in high school.

But really she’s pretty sure that it’s one sport for each parent at this point. She might have to revisit the issue if this year’s wrestling postseason festivities inflate Kellen’s confidence once again.

“Well, boys volleyball is an up-and-coming thing, but I don’t know if I’d want to. I don’t know,” she said.