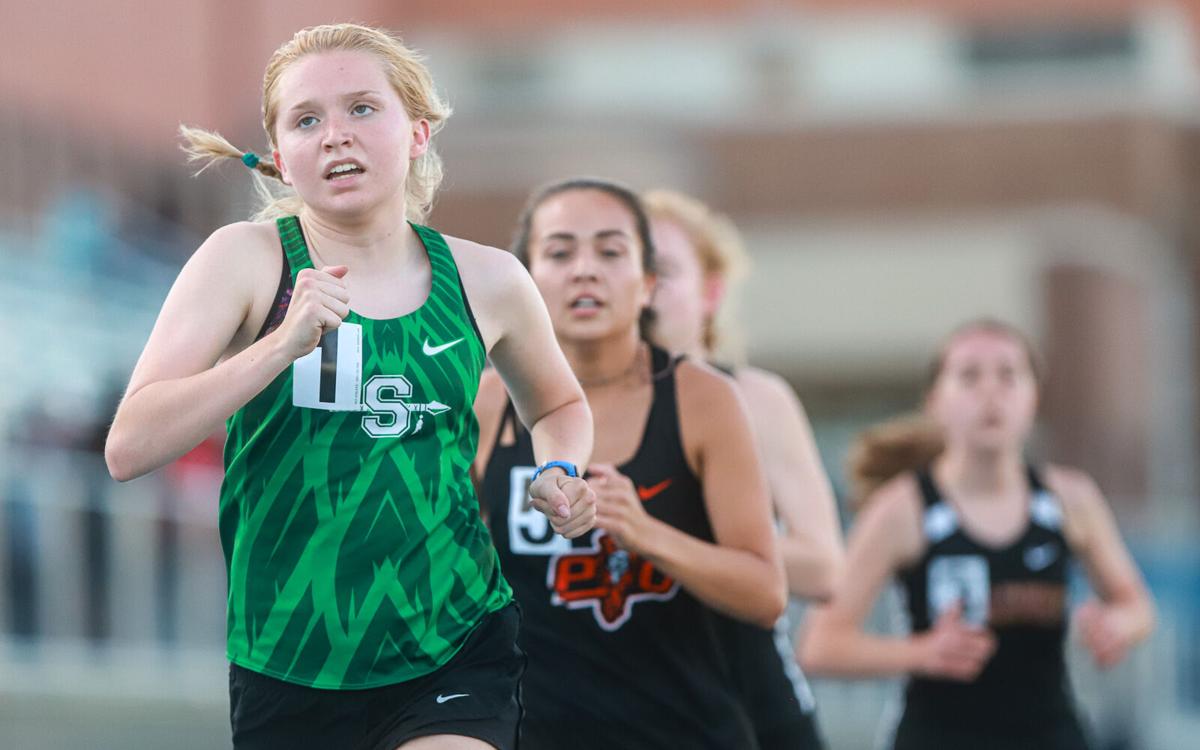 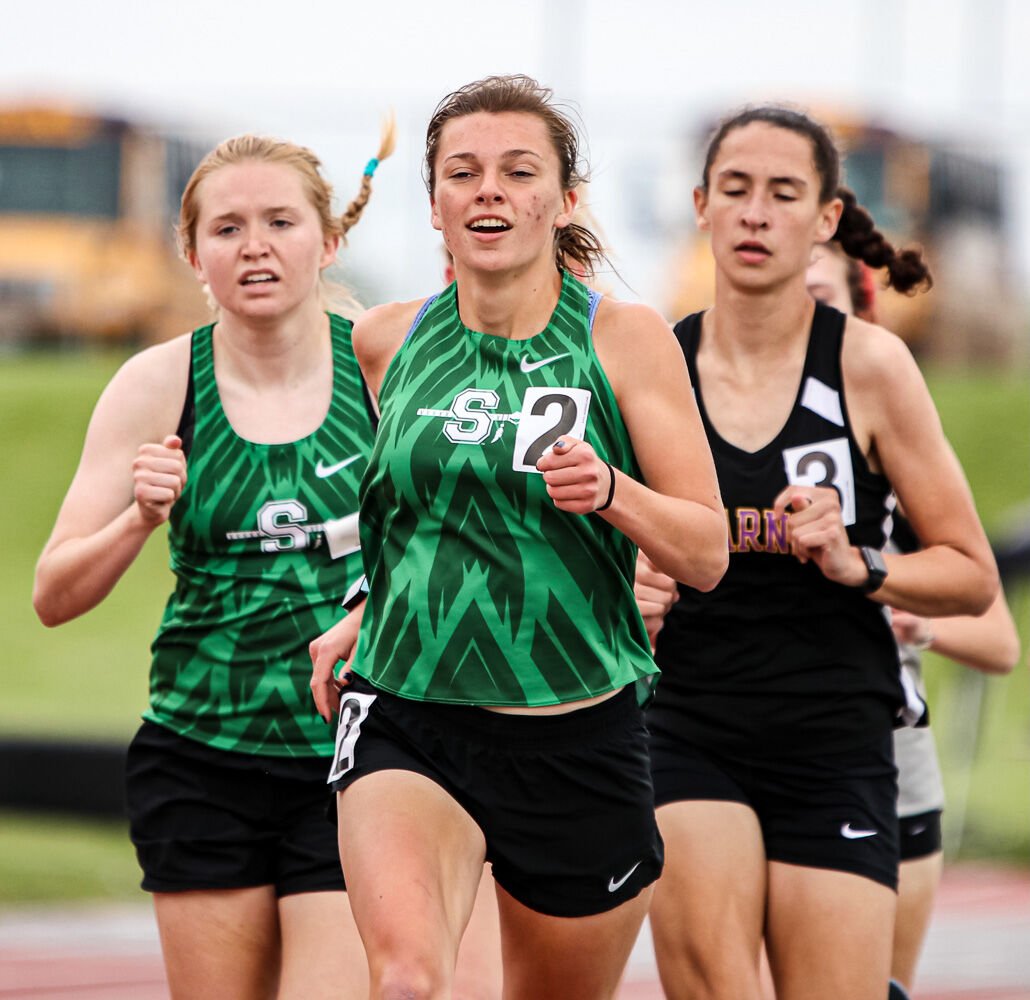 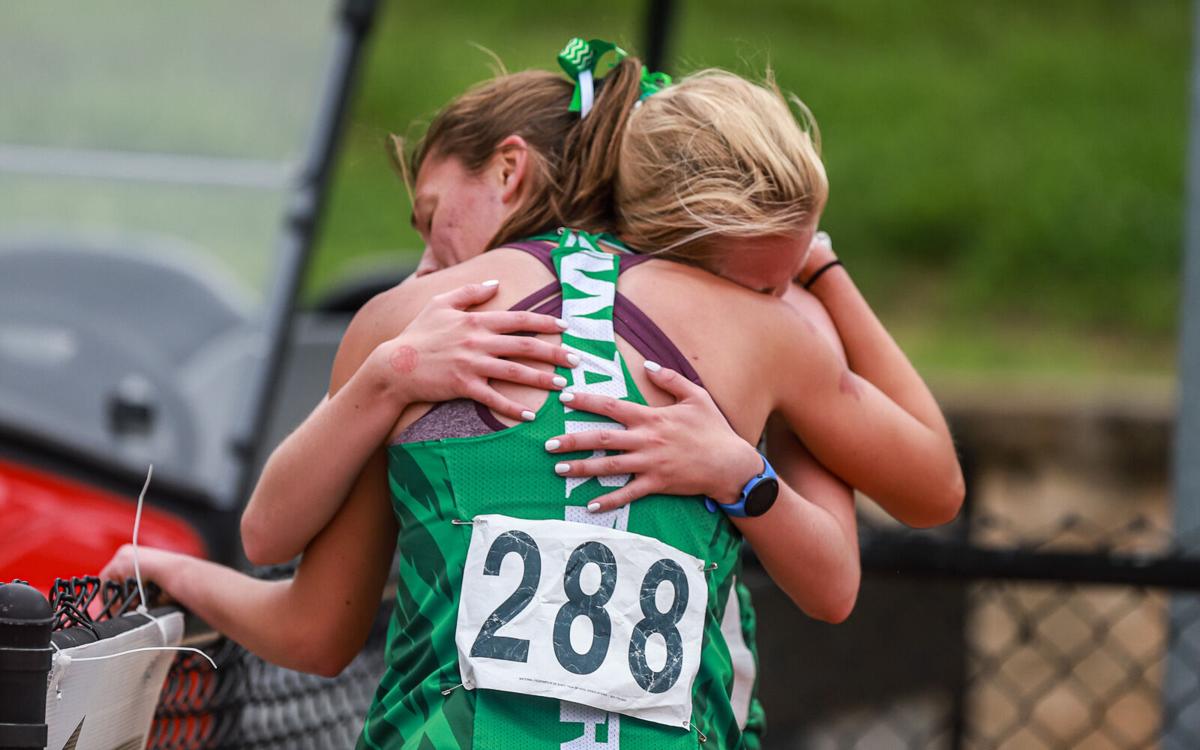 Smithville seniors Lily Cutler and Olivia Littleton embrace after Cutler takes second in the 1600-meter race during the Missouri Class 4 track and field state championships Friday, May 28 at Adkins Stadium in Jefferson City.

Smithville seniors Lily Cutler and Olivia Littleton embrace after Cutler takes second in the 1600-meter race during the Missouri Class 4 track and field state championships Friday, May 28 at Adkins Stadium in Jefferson City.

Littleton led the charge as Smithville cross country earned a team trophy with a fourth-place finish at the Missouri Class 4 state cross country meet in November. Littleton took runner-up in that race, securing her third top-three state finish after earning second as a junior and third as sophomore. Cutler took 17th while Kochanowicz finished 28th and Chevalier finished 32nd at that meet.

Cutler led the way for Smithville track by securing two runner-up finishes in individual races and a medal in her final outing with Smithville’s pack of senior long distance runners at the Missouri Class 4 track and field state championship on May 28.

Cutler took second in the 800-meter run with a time of 2:18.35 and took second in the 1600-meter with a time of 5:06.88. Cutler earned a state medal in the 1600-meter during all three seasons that she’s competed, taking sixth in 2018 and seventh in 2019. This was her first crack at the 800 meter after she won the district title her sophomore year but was unable to advance past sectionals.

Macy Schelp of Lutheran South took first in both of those events, as well as in the 3200-meter run, but it was less important who finished in front of Cutler than it was important who ran the races with her.

Cutler, Littleton, Kochanowicz and Chevalier were able to complete their Smithville careers together when they took sixth place in the 4x800-meter relay with a time of 9:55.43.

“It was really emotional to be able to have one last hurrah together and really depend on each other one last time,” Cutler said.

Littleton ran by herself in one race during the state championships this year and that was the 3200-meter run. As sophomore she won the state title in that event, bringing home the first individual state title for Smithville since 2003.

Littleton narrowly took fourth in the 3200 during the district meet on May 15. Her time of 12:33.50 was the second slowest time of her high school career, ahead of only her first meet during her freshman year.

With her soccer season finally over, Littleton made a massive improvement at sectionals as she took third place with a time of 11:54.27. She had hoped another week with her focus on track and her body recovering without a second cardio intensive sport, she could return to her sub-11:30 times.

She did not get the results she wanted, particularly when she entered her junior year with the possibility of earning a three-peat in the event, but her attitude never wavered during her final outing as a high school runner.

When she finished 12th in the 1600-meter race, she seemed less concerned with her own time than that of her teammate Lily Cutler getting her name stripped across the line for second place.

From within a sea of hunched over and exhausted runners, a scream echoed out “Lily!”

Littleton added another five meters of running to her 5600-meter day when she rushed to embrace her teammate. Kochanowicz avoided the additional steps by finding Cutler immediately after finishing the 800. Her face also lit up with a smile upon seeing Cutler secure another second-place finish.

“There’s not one person that works harder than that girl,” Littleton said of Cutler. “She’s been wanting that for her whole high school career.”

The Smithville senior runners started the year navigating a pandemic altered cross country season where the first few events had no fans allowed at all. Littleton noted at the time that the Tim Nixon Invitational to kick off the fall season was the first time her mother had missed one of her races.

Chevalier ran straight from the cross country course to the gym as she started her girls basketball season with the Warriors. Her team was composed of another group of life-long friends who were on a mission.

Chevalier joined fellow seniors Christina Walsh, Allie Andrews and Mckenzie Robinson during a basketball campaign in the winter that culminated in Smithville’s first district championship since 2013 and a trip to the state quarterfinals.

Littleton joined Robinson on a girls soccer team that had as much emphasis on the underclassmen as it did on the seniors, particularly with Robinson suffering a shoulder injury that upended the finish of her basketball season and the start of her soccer season.

Littleton helped Warriors girls soccer finish with a 5.5 goal average scoring margin and 17-6 record, which included four losses by a single goal. Despite her dual schedule of grueling sports in the spring, Littleton never complained about her workload.

But in the end the three of the four girls will get to race again, although they will be wearing different uniforms this time.

Littleton will continue her running career at Southwest Baptist University. Cutler will run at Missouri Western.