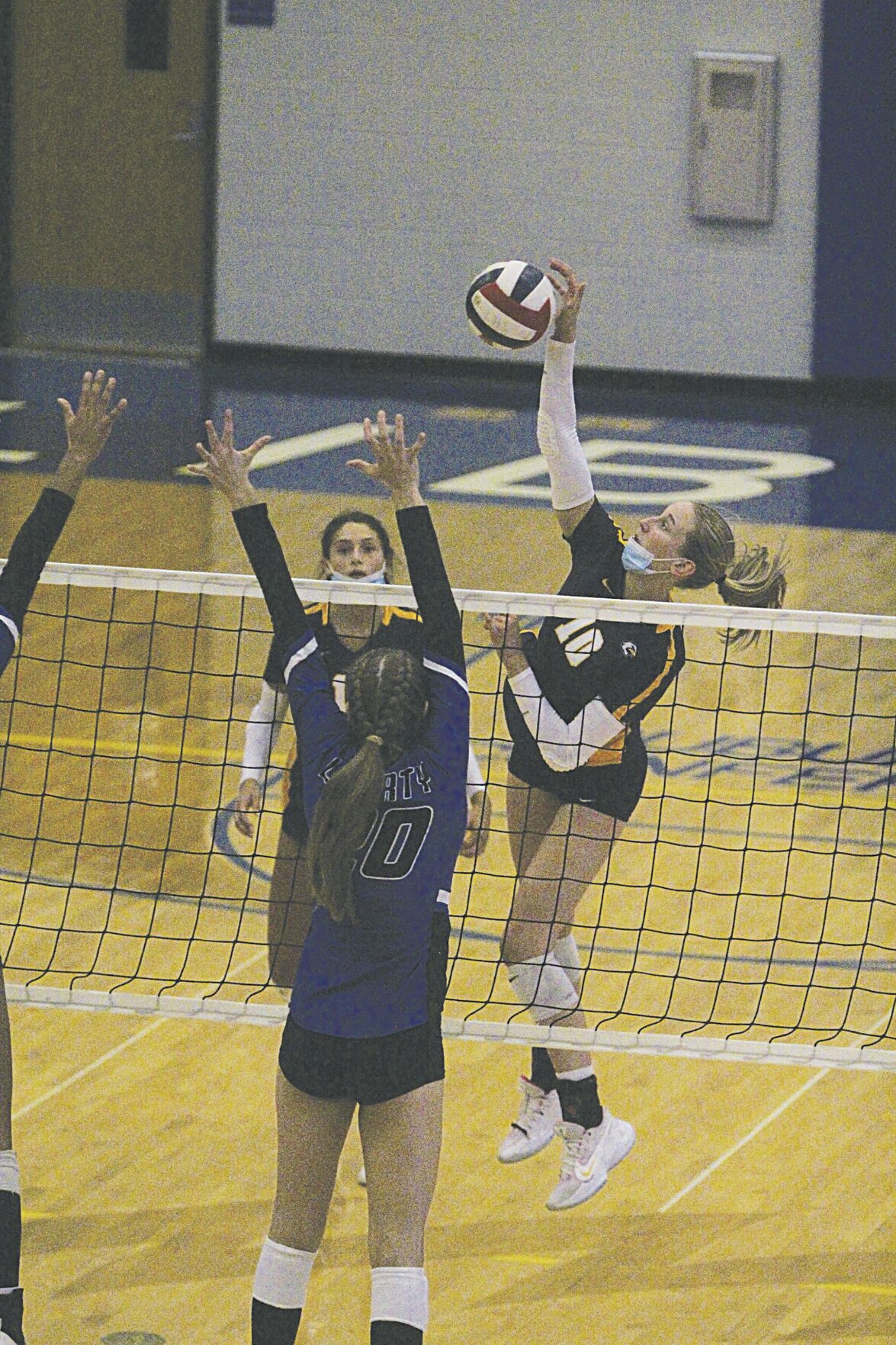 Isabel Zimmerman had 11 kills for the Eagles during Tuesday, Sept. 14’s road contest at Liberty High School. The Eagles came away with a win over the Blue Jays. 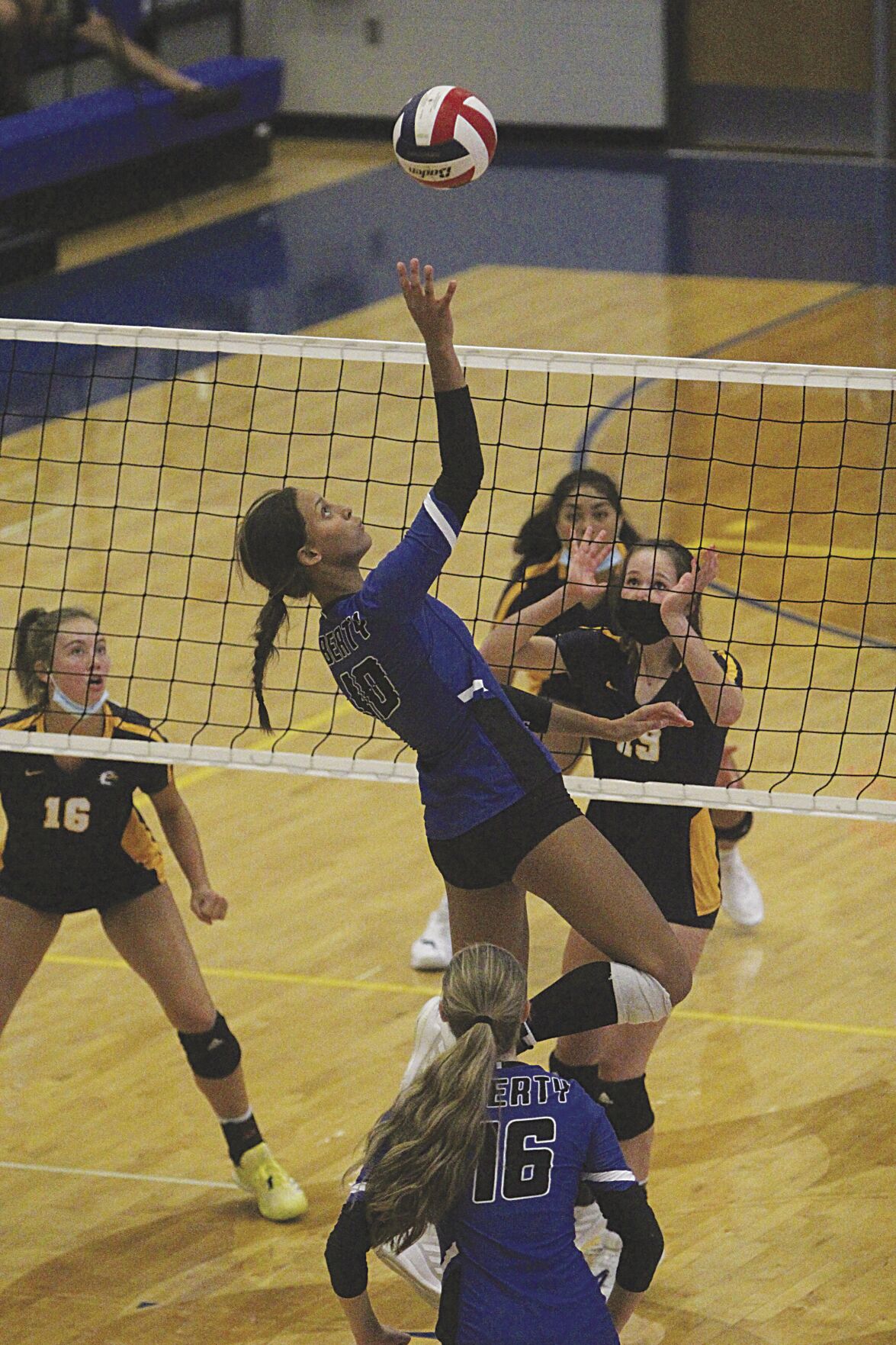 The Blue Jays' Brooklyn Young plays the ball across the net during Tuesday, Sept. 14’s loss to the Eagles volleyball team.

Isabel Zimmerman had 11 kills for the Eagles during Tuesday, Sept. 14’s road contest at Liberty High School. The Eagles came away with a win over the Blue Jays.

The Blue Jays' Brooklyn Young plays the ball across the net during Tuesday, Sept. 14’s loss to the Eagles volleyball team.

LIBERTY — Bragging rights, at least for the moment, belong to the Eagles.

“It is two amazing teams in the same community with an unprecedented rivalry,” Liberty North head coach Katie Dowden said. “A lot of these kids play club (volleyball) together all the time and they are friends. It is a friendly competition and then a rivalry on top of it.”

Liberty North (5-1) jumped out to a 18-11 advantage in the first set, but the Blue Jays battled back to within a pair of points when Jocelyn Renfro scored an ace to push the score to 24-22. The junior’s next serve hit the net, giving the Eagles the first set, but Liberty continued the momentum into the second set.

Leading 12-11, Liberty scored six of the next seven points, led by a pair of kills by senior Madison Corf to pull away. Junior Abby Chambers converted an ace later in the frame to tie the contest at a set apiece.

“I just thought we started making plays,” Liberty head coach April Fleming said. “We kind of killed ourselves on missed serves. We cleaned it up, played better volleyball and the score reflected it.”

Liberty North, utilizing a deep batch of hitters, jumped out to a 12-7 advantage in the third set after Nela Misipeka and Rory Stanley recorded back-to-back blocks. Minutes later, a Carlie Cisneros kill put the Eagles up 17-12.

Liberty battled back, taking the lead with six straight points. Freshman Abigail Mullen had a pair of kills during the rally.

Later tied at 20-all, Stanley recorded a pair of aces during a 4-point streak to push her team to a setpoint.

“I was just watching the position that (Coach) Dowden gave. I didn’t want to lose the ball. I just tried to keep it in play,” Stanley said.

Liberty seemed to recapture the serve, but after a long discussion by the referees, the point was replayed.

“They were saying it hit the ceiling, but we thought our player touched it first to keep it on our side,” Dowden said.

Corf helped her team come within three points with a kill, but an unforced error on the setpoint gave Liberty North a 2-1 set advantage.

“I think we are a very deep team,” Stanley said of her teammates. “I feel like every player has value and can put the ball down. That is what is special about us.”

“She is a great player. She competes and plays high club volleyball. She has a big volleyball IQ and is a great weapon at the net,” Fleming said.