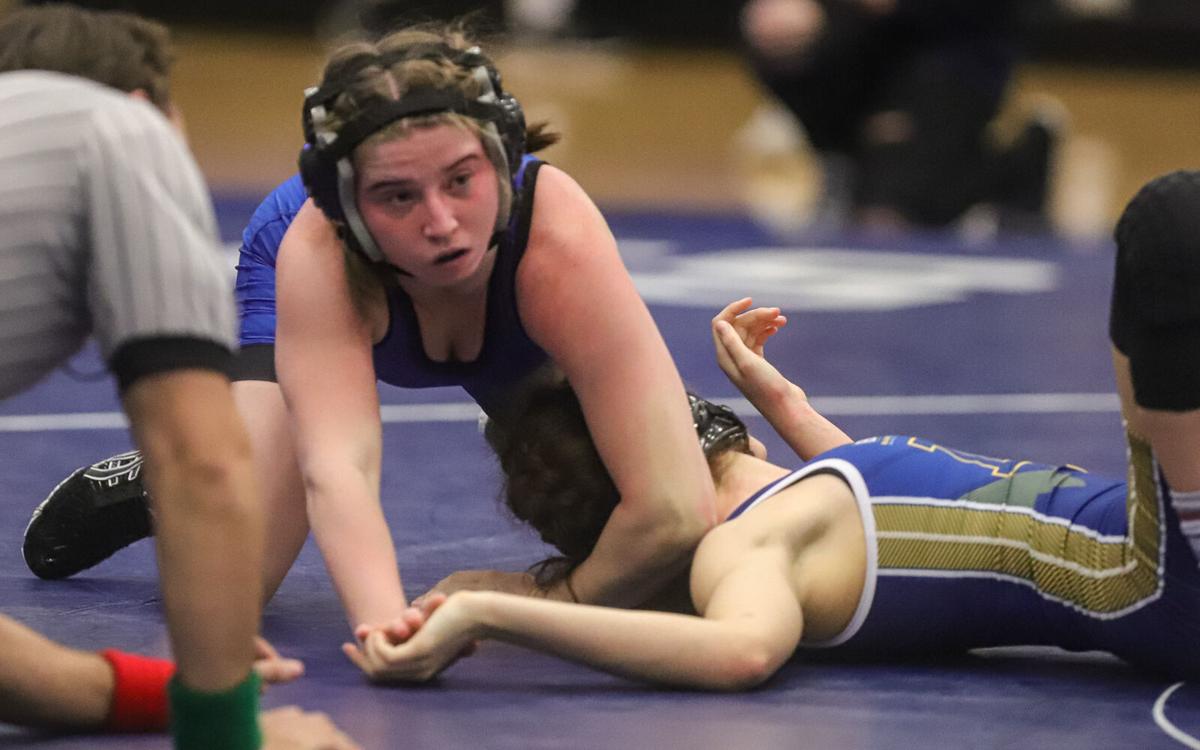 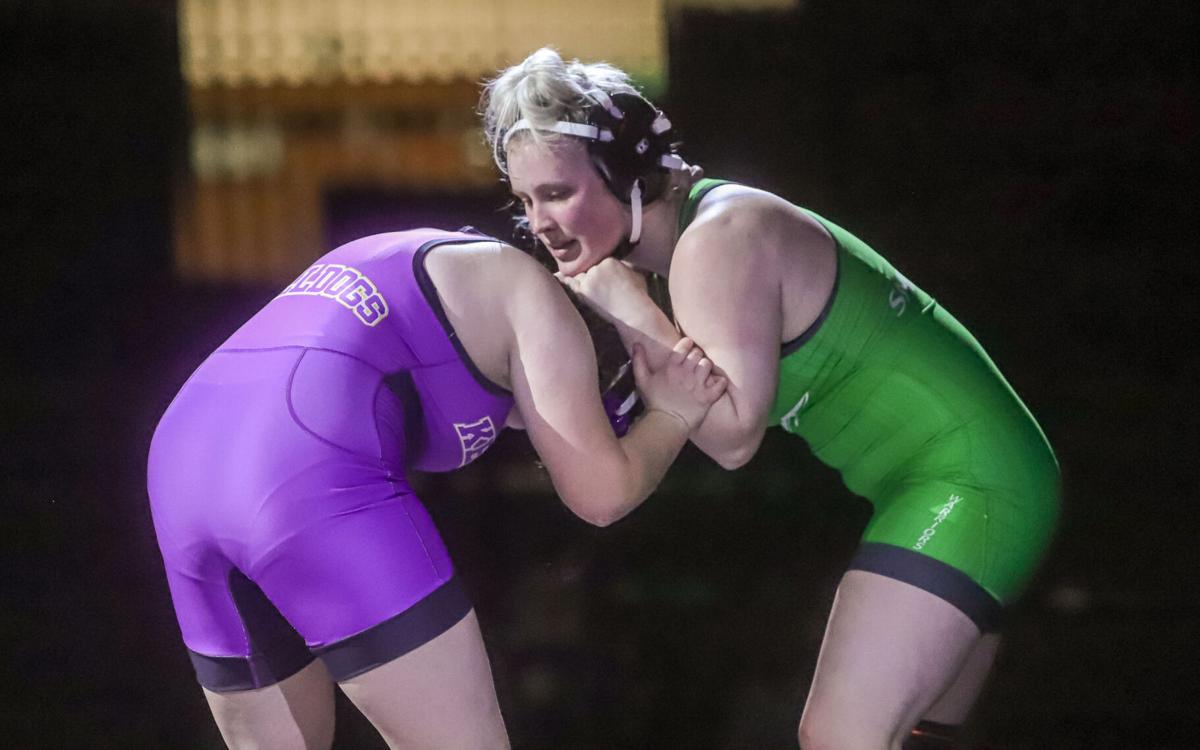 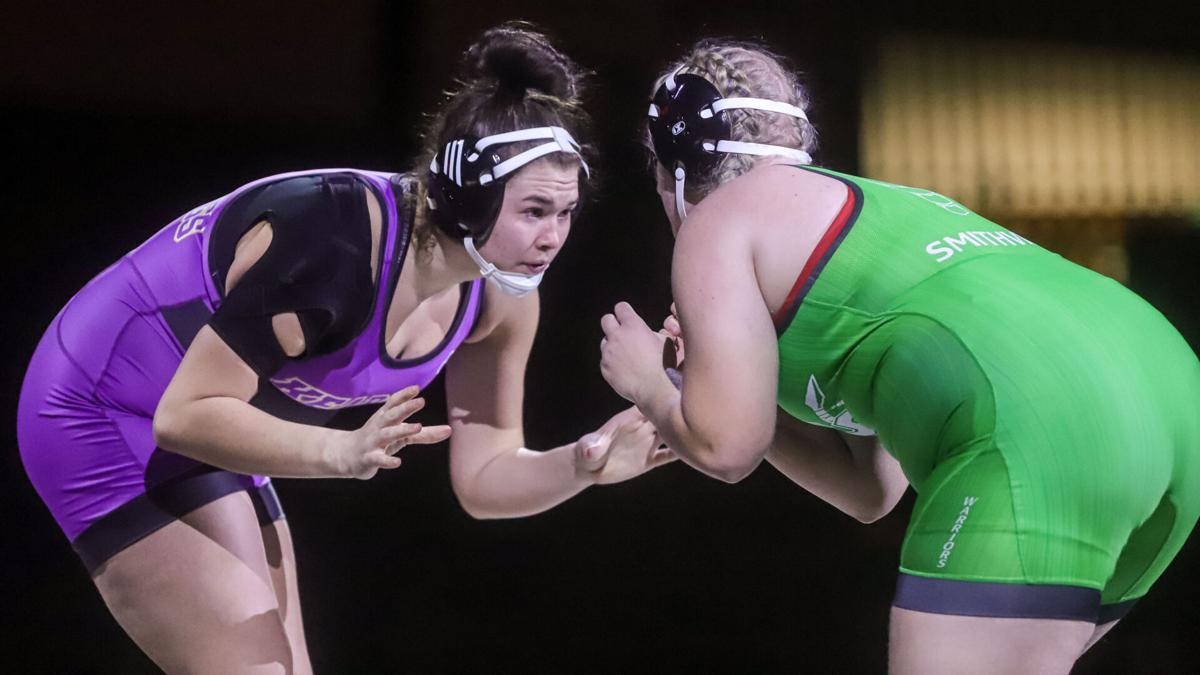 LIBERTY — Eight area girls wrestlers earned a spot at the state tournament by finishing in the top 3 at the Missouri Class 1 Sectional 4 tournament Saturday, Feb. 20 at Platte County High School.

Sophomore Daisy Rapp will join Breeden at state after finishing second in the 127-pound weight class. Rapp earned a pinfall victory in her first match and 6-5 decision in the semifinals. She settled for runner-up after a second-period pinfall against Eve Herlyn of Park Hill.

Jaden’s twin Julia Breeden was not able to match her sister as she lost to Payton Weese of Marceline by pinfall early in the final period of their semifinals match. She would be eliminated with a first-period pinfall loss against Jazlynn Mahoney in the consolation semis.

Angel Sanchez-Hernandez improved on her fourth-place finish at districts by flipping the result of her semifinal match from two weeks ago. In that one, Sanchez-Hernandez lost by 3-2 decision against Aniya Coleman of Park Hill South.

This time, she got herself a 3-1 decision over Coleman and advanced to the championship match. Sanchez-Hernandez earned second place after losing to Jacklyn Fast of North Kansas City by pinfall.

Erma Williams (151) finished with a third-place medal. Williams picked up a pinfall victory over Sierra Brassfield of Lathrop before losing by pinfall in the semifinal against Payge Fuller of Plattsburg. She battled back with two straight pinfall wins, including her win in third-place match over Brassfield that punched Williams’ ticket to state.

Kate Grundy landed in the consolation bracket thanks to another semifinal pinfall loss to the eventual 195-pound champ, KayLyn Munn of Platte County. Grundy also repeated her districts’ performance by powering her way to the third-place match.

This one required a win to advance to state. Grundy delivered with a 4-1 decision of Mary-Mae McMillian of William Chrisman.

Elaina Gorton (235) fell to the consolation bracket after losing to two-time state champion Lexie Cole of Kearney in the semifinals. She pulled off two straight pinfall victories to finish third and advance to state.

Lexie Cole still has a chance to retain her title as the only 235-pound state champion in Missouri girls wrestling state history, but she left sectionals with one distinction she won’t have in her wrestling career. The senior settled for second place at her first and only sectionals competition.

Cole picked up two pinfall victories to reach the finals, but ended up getting pinned by Kiara Boldridge of William Chrisman in the second-period of the finals.

Now she will look to duplicate the rebound effort she showed during her sophomore year. She lost in the district semifinals that year before wrestling her way to third place and ultimately on to a state title.

Hailey Romero (174) narrowly missed a trip to state as she finished fourth at sectionals. Romero picked up two pinfall victories in the tournament, but slipped in the semifinals with a pinfall loss to Raziyah Thomas of Marshall. She battled through the consolation bracket, but her season ended after losing by pinfall to Zoey Chrisman of Brookfield.

Emily Knight (159) gave the Warriors their lone state bid after two others lost in the third-place match.

Knight lost by pinfall in the semifinals against Oscarina Jackson of Brookfield. She recovered with two 8-1 decisions, including her victory over Nevaeh Wardlow of Oak Park to earn a state bid with third-place.

Ruby Scarborough (107) and Veronica McNeece (143) also battled through the consolation bracket but were not able to get the final win they needed as both finished in fourth place.

Scarborough lost in the first minute of her quarterfinal match against Isa-Bella Mendoza of St. Joe Lafayette. She won two straight matches via pinfall to earn another go at Mendoza, but Scarborough went down via pinfall during the closing seconds of the first period in the third-place match.

McNeece had a similar experience with facing Layson Hafley of Mid-Buchanan twice, but her first match with a longer battle where Hafley picked up the pinfall late in the second period.

After a couple pinfall wins in the consolation bracket, McNeece ended up losing by pinfall 40 seconds into her second scrap with Hafley in the third-place match.

All of the state qualifiers will compete at the Missouri Class 1 girls wrestling state tournament Tuesday, March 9 at Cable Dahmer Arena in Independence.