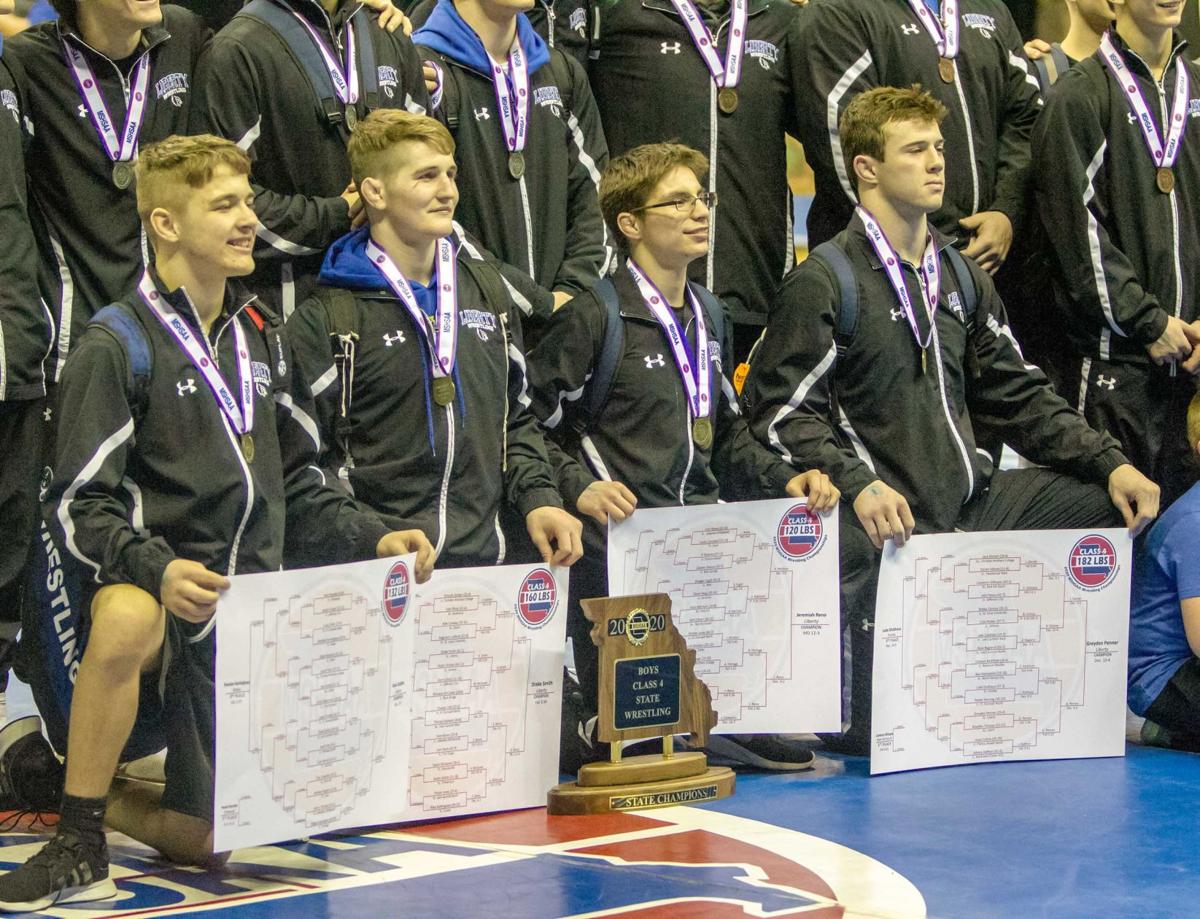 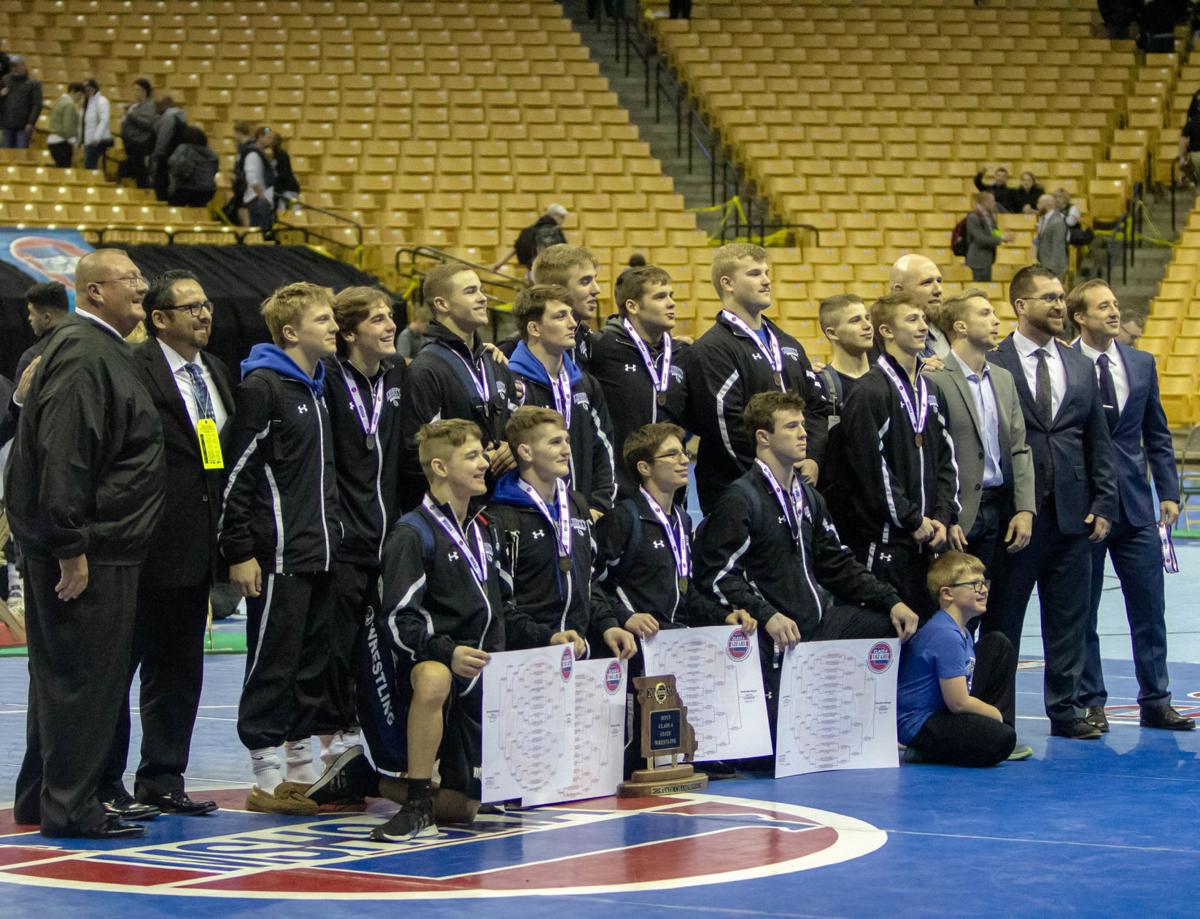 The Blue Jays wrestling team refers to itself affectionately as “the Wolfpack.” It was clear Liberty coach Dustin Brewer’s pack was hungry at the Missouri State High School Activities Association Boys Wrestling Championships.

The Blue Jays record-breaking performance was nearly indescribable for most members of the program. But their assistant coach found a few words to describe it.

“It was too sweet,” Kellen Laws said.

The phrase “too sweet” is not exactly original, as Laws lifted it from the world of professional wrestling — specifically, the World Championship Wrestling stable known as the New World Order. As an homage to the group, the Blue Jays refer to themselves as the Wolfpack.

“(Laws) started it last year,” Brewer said. “He bought the guys nWo shirts and the Wolfpack stuff. I thought it was kind of funny when he did it, but I think it really brought our guys together and kind of gave them something to hold their hats on and just be a group.”

The Wolfpack’s dominant performance was led by Jeremiah Reno (120), who capped off an 179-0 undefeated high school wrestling career with his fourth state title. Reno earned 44 wins this season, with his last coming by way of 12-3 major decision over Park Hill’s Kody Ketchum.

The Nebraska commit had conflicting emotions about becoming just the third wrestler in the Missouri state history to finish a high school career with zero losses.

Reno recalled during freshman year when he and Greyden Penner were part of a trio that went to state during coach Brewer’s first year at the helm. Each year, the Wolfpack grew until Liberty amassed 13 state qualifiers out of 14 weight classes at the district meet.

“First year, we knew we didn’t have a chance for the team race or anything,” Reno said. “But it was awesome to see me and Greyden grow throughout the years and get more people to follow us.”

Smith secured his via second-period pinfall over Lafayette Wildwood’s Evan Boren, but his semifinals match was the toughest victory. The senior squeezed out a 2-1 decision against Christian Brothers College’s Vincent Zerban, who was Missouri’s No. 1-ranked 160-pound wrestler going into the match.

“That was a huge match and a great win for him,” Brewer said. “I don’t think that there’s anybody on our team this year that deserved the state title more than Drake Smith.”

Dutton had the closest championship battle. He beat Trey Crawford earlier in the year before the Park Hill product returned the favor in the 132-pound district finals. This time, Dutton made the adjustments to earn his state title with a 5-3 decision in their rubber match.

Three other Blue Jays — Wentric Williams (170), Logan Rathjen (145), and Kage Lenger (138) placed second after falling in their finals matches. Each of those contests was also a rematch of the district finals.

Williams III elicited feelings of deja vu when he was once again tied 1-all with Staley’s Aidan Johnson. But Williams came out on the losing end this time as Johnson was able to secure the first points to win the 170-pound state title by sudden victory.

Rathjen and Lenger each had two shots this week at one of the Miller brothers of Park Hill, Kal and Ethen, but neither was able to secure a win. Rathjen lost to Kal by 5-0 decision while Lenger fell to Ethen by 3-1 decision in their respective state finals matches.

Despite those tough losses, Brewer wants those wrestlers to remain positive about their experience and what the future holds.

“All those guys that took second are returners for us,” Brewer said. “So we’re going to get them right next year. We’ll just keep training harder and just keep getting better. Hopefully we can come back and those guys can win state titles next year.”