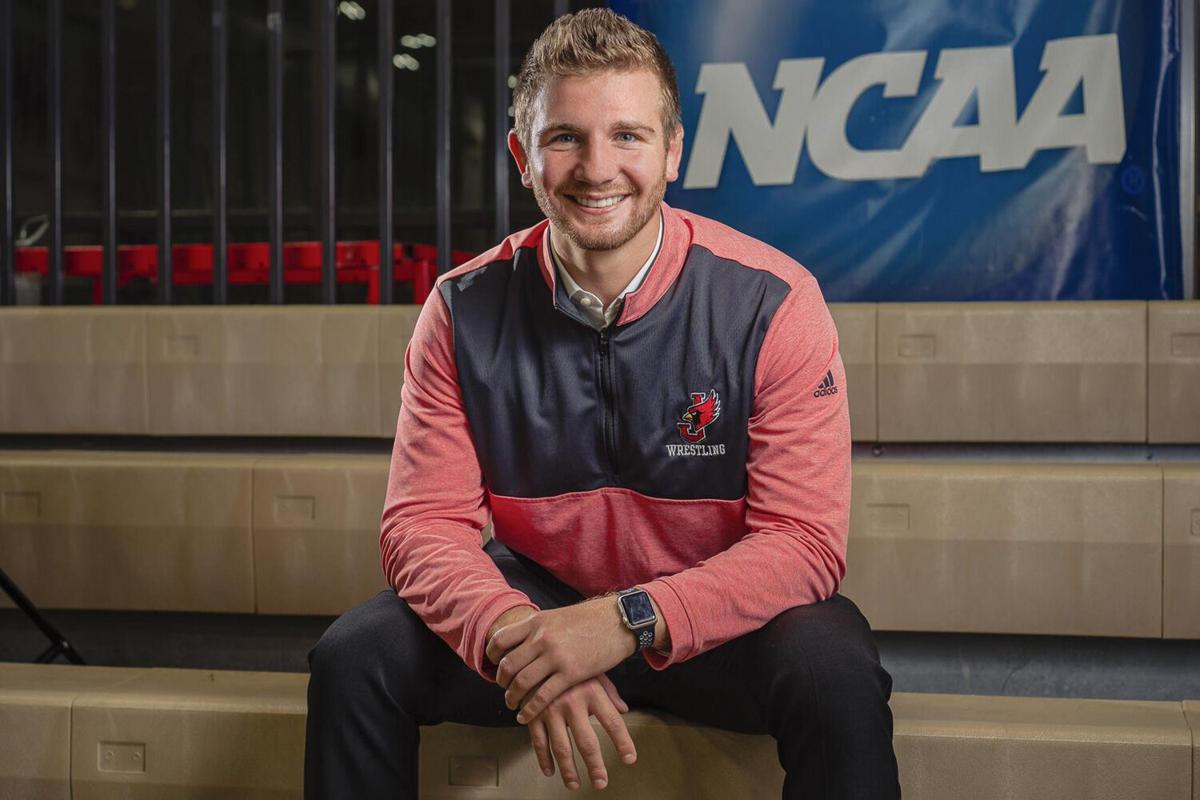 William Jewell head wrestling coach Keenan Hagerty announces the signing of the first men’s wrestlers in 28 years, and the first signing class of his career. 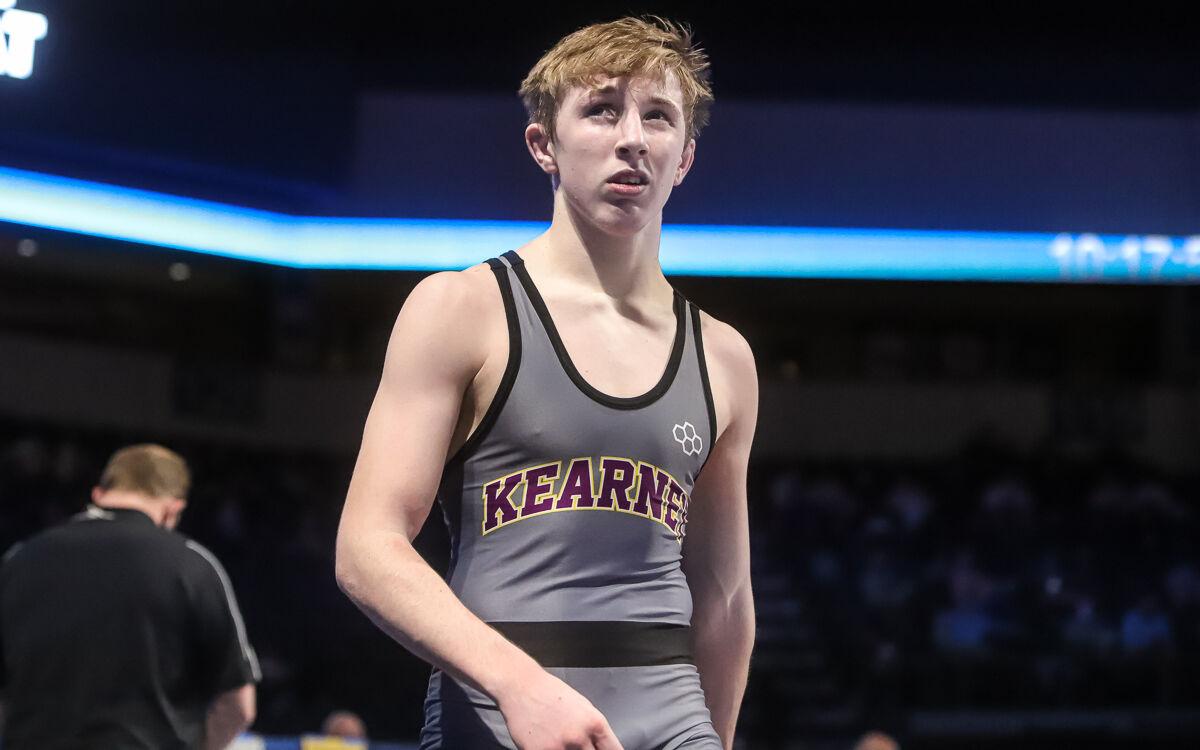 Kearney’s Garrett Deason during Missouri Class 3 boys wrestling state tournament March 12 at Cable Dahmer Arena in Independence. Garrett signed to wrestle at Williams Jewell as a part of the Cardinals first recruiting class since the program shut down in 1993. 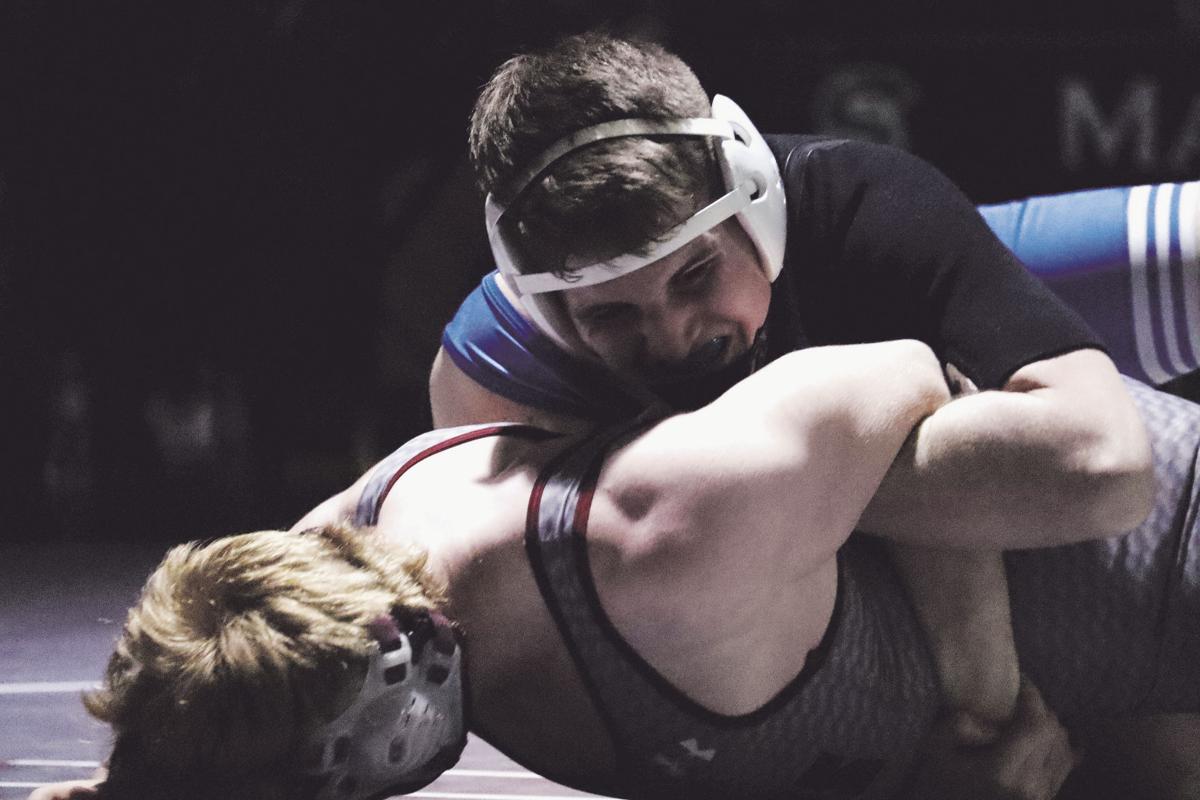 William Jewell head wrestling coach Keenan Hagerty announces the signing of the first men’s wrestlers in 28 years, and the first signing class of his career.

Kearney’s Garrett Deason during Missouri Class 3 boys wrestling state tournament March 12 at Cable Dahmer Arena in Independence. Garrett signed to wrestle at Williams Jewell as a part of the Cardinals first recruiting class since the program shut down in 1993.

LIBERTY — William Jewell head wrestling coach Keenan Hagerty announced the signing of the first men’s wrestlers in 28 years and the first signing class of his career. The men’s wrestling program was officially reinstated on June 1, 2020, after being discontinued in 1993.

“I am excited to recognize the first group of men’s wrestlers on our campus since 1993. We have a great group of student-athletes coming in this fall, who are ready to rebuild and create new traditions,” Hagerty said. “This group of young men have embraced the challenge of walking onto a new campus in the fall as the leaders into Jewell’s history of a renewed and reenergized NCAA Division II wrestling program. We are thrilled to get to work and began the journey.”

The 16 student-athletes who will join the Jewell community in the fall hail from four states and combine to total 36 state qualifiers and 23 state medal winners, including three state champions, while averaging a GPA of better than 3.4.

Garrett Deason comes to Jewell from nearby Kearney where he entered his senior season as a three-time district champion and four-time state medalist after taking fourth at the Missouri Class 3 state championships back in March. He started his career with a fourth-place mark as a freshman followed by back-to-back third place finishes while also earning Academic All-State honors. He is the son of Jeff and Tonya Deason.

Drake Smith becomes a Cardinal after a four-year career at nearby Liberty High School where he competed under coach Dustin Brewer. He won an individual state championship in 2020 as the Blue Jays dominated competition on their way to the team title. In total, Smith was a three-time state medalist during his career. The son of Jason and Tausha Smith, he plans to major in political science. Smith opted to delay starting college for a year as he rehabbed from shoulder surgery he had in July 2020.

The lone transfer on the men’s side, Benshoof returns home after spending his first two collegiate seasons at Augsburg University in Minneapolis, Minnesota, during which time he went 10-8 with five pins. At Grain Valley High School, he was a three-time state qualifier, twice finishing as the runner at 106 and 126. He holds the school record with 107 pins and is second most with 165 wins, going 165-30 over his four seasons. Additionally, he earned three Academic All-State honors and was a member of National Honor Society and Future Business Leaders of America. The son of Chad and Cari Benshoof, he is majoring in accounting.

A winner of more than 100 career matches, Courtney comes to Jewell from Savannah High School under coaches Micah Phillips and Bryson Ellis. He was a 2018 state qualifier and two-time team captain entering his season year. Also a standout in the classroom, he has been a member of High Honor Roll and National Honor Society. The son of Ryan Courtney and Jill Courtney and plans to major in biology.

Davenport joins the Cardinals after finishing his Grandview High School career at the Missouri State Championships, while competing under coach James Evans. Additionally, he participates with Mowest Wrestling under coach Jason Heslop. Off the mat, he earned a varsity letter in track and field and cross country, qualifying for the 2020 state cross country meet. The son of Leslie Davenport, Sr. and Ericka Tyson, he plans to major in psychological science.

Kalafut was a four-year varsity letterwinner at St. Thomas Aquinas where he was a two-time state qualifier prior to his senior season and a 2019 USAWKS District Champion. The son of Kevin and Melaney Kalafut, he plans to major in business administration.

Akin comes to the Cardinals from St. Thomas Aquinas, where he wrestled under his father, Eric. He held a career record of 120-27 prior to his senior season and was a 2020 state champion at 138 pounds. He is the son of Eric and Stephanie Akin.

Horman comes to The Hill from Chaffee by way of Jackson High School where he was a Class 4 state medalist in 2019 and 2020. Additionally, in 2020, he was the 152-pound district champion and won his second consecutive conference title. He also enjoyed a standout career on the football field with three conference championships, two district titles and capped off his four years with a 2020 Class 5 State Championship. Also an excellent student, Horman was a three-time Academic All-Conference honoree with two Academic All-State nods. The son of Scott and Leslie Horman, he plans to major in biology with an emphasis in pre-medicine.

A native of Warrensburg, Johnston was a three-time state qualifier and two time medalist at Knob Knoster High School. In 2020, as a junior, he was named the District Wrestler of the Year and finished second in the state tournament. Additionally, he was a two-time All-Conference selection. Off the mat, he was an excellent student, earning two Academic All-State honors, three Academic All-Conference nods and is a member of National Honor Society. The son of Chris and Bethany Johnston, he plans to major in business administration.

Taylor comes to the Cardinals from Diamond High School where he was a 2020 state qualifier. Off the mat, he has earned an academic letter. The son of Robert and Mysti Taylor, he plans to major in secondary education.

Williams became the first signee for the Cardinals in 27 years and comes to The Hill from Rogersville High School after placing fourth at the Missouri State Championships as a sophomore in 2019. He helped lead the Wildcats to two top-three finishes in the conference in 2019 and 2020. Off the mat, he was also an All-Conference performer on the football field and earned two All-Conference nods in the pole vault. An excellent student, he is a member of the Principals Honor Roll. The son of Timmy and Mandy Williams he plans to major in Civil Engineering.

CamRon Timmons comes to Jewell from Tulsa, Oklahoma where he competed under coach Dan Jefferson for both Union High School and Team Icefighter. A Fargo national qualifier, he placed third in the Southern Plains in freestyle and fourth in Greco. Off the mat he was an Academic All-State honoree. The son of Jeremiah Timmons and NiTia Edwards, he intends to major in communication.

The second of two California natives in the signing class, Victoria competed for Dublin High School under coach Sam Durham and Livermore Elite Wrestling Club and coach Rich Bailey. A three-year letterwinner for the Gaels, he was a two-time Most Value Wrestler after being named the varsity Rookie of the Year as a freshman. As junior, he won the East Bay League and Northern California Section on his way to the CIF Championships. He also had two third place league finishes and two top-seven Section marks during his first two seasons. All CIF tournaments were canceled during his senior season due to COVID-19. The son of Ed and Tara Victoria he plans to major in nursing.

Longoria is one of two new Cardinals hailing from California by way of Kingsburg High School where he competed under coach Coleman Hammond. For the Vikings, he finished third in the Central Section Division Two at 106 pounds, followed by a 10th place mark in 2020 at 120 pounds. Additionally, he competed at the USA Wrestling Utah State Championships where he fnished third in Greco and fifth in freestyle in 2020. The son of Pete and Melissa Longoria and plans to major in political science.