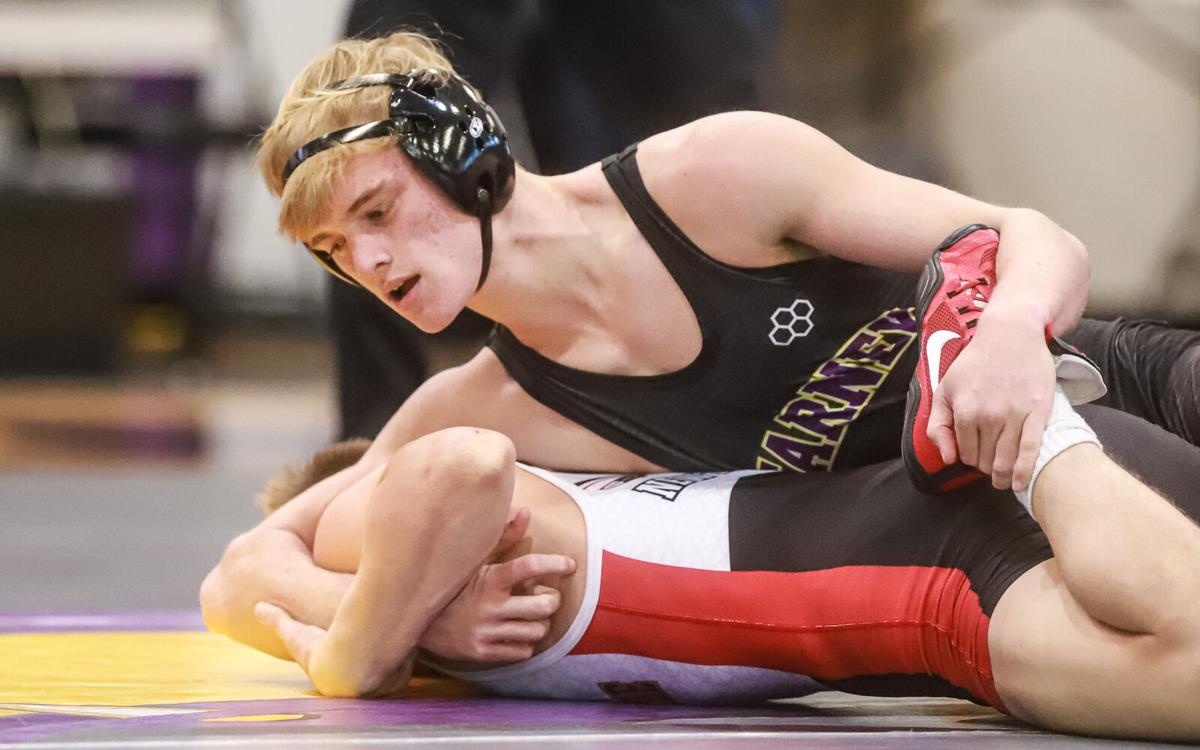 Kearney’s Ben Locke keeps a hold of his opponent’s leg in a championship final during the Missouri Class 3 District 8 tournament Saturday, Feb. 13 at Kearney High School. 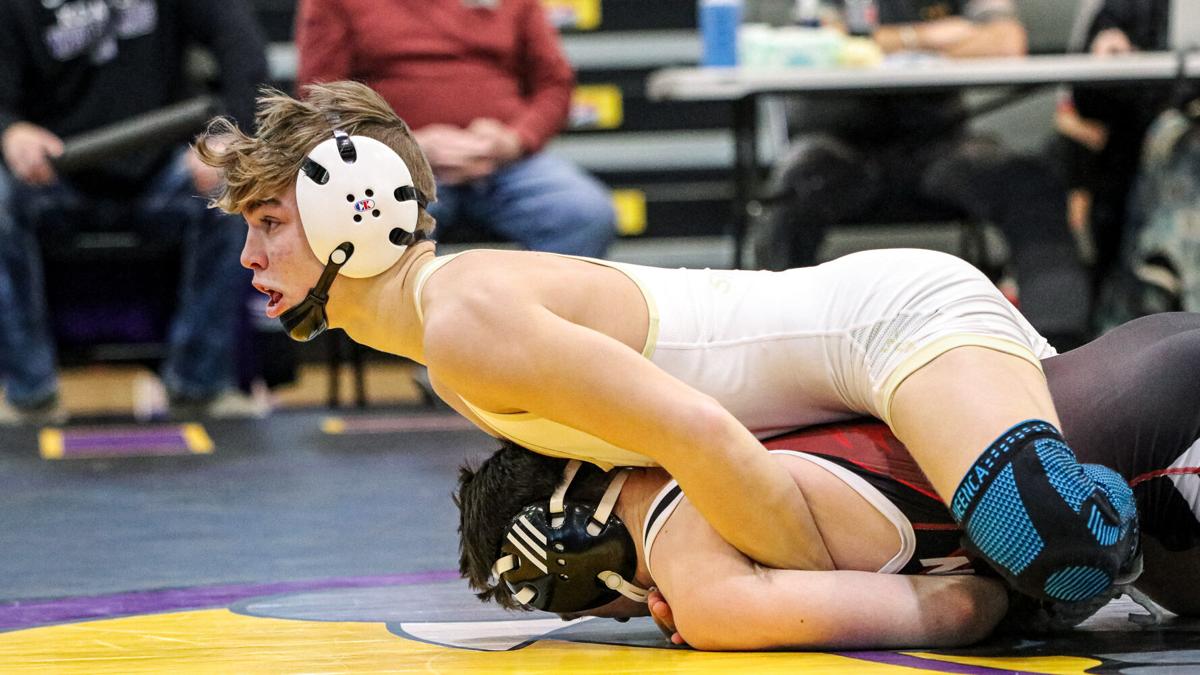 Kearney’s Ben Locke keeps a hold of his opponent’s leg in a championship final during the Missouri Class 3 District 8 tournament Saturday, Feb. 13 at Kearney High School.

KEARNEY — The Kearney boys wrestling team was not able to keep its district tournament streak alive, but the Bulldogs did have a trio of wrestlers win district titles on the way to a third-place team finish.

Kearney scored 140.5 points to pull away from rival Smithville’s 123.5 points in the late going, but could not close in on district champion Platte County’s 176 points or runner-up Fort Osage’s 169.

“It’s been an up-and-down year so this is a good way to start the postseason,” Kearney head coach Jake Hill said. “The team’s third-place finish, that’s something we can be happy with.”

Eli Ashcroft (132) won his third straight district crown as he keeps his eyes set on the same streak in regards to state championships.

In a year filled with changes, many caused by the COVID-19 pandemic, Ashcroft had an interesting answer if those factors changed how he felt about his most recent accomplishment.

“Nope,” Ashcroft said. “Not any different, just another step toward state.”

He said even the addition of sectionals and the extension of the season by a month would simply give him more time to work on his craft.

“It’s a lot more training, another two weeks in the room to get better and keep sharpening our skills,” he said.

Ben Locke (152) finally secured an individual district championship after taking second place the last two seasons. Locke won both his matches by pinfall, including his third-period victory over Jesse Newton of Fort Osage in the finals.

Zach Olson (220) completed a gantlet of revenge matches as he beat three straight opponents who had victories over him earlier this season on his way to winning his district title.

Olson lost to his finals opponent, Mason Crim of Smithville, in a dual back on Jan. 19. In that match, Olson went for a shoot late in the match and got caught underneath.

This time, he knew to stay smart on his feet.

“That got me stuck, so I stayed away from doing that,” Olson said. “Just kept hand fighting, wearing him out and rode him out in the overtime.”

Olson medaled at districts for the first time, having finished in the consolation semifinals each of the past two seasons.

Seven Bulldogs advanced to the top four while two of those ended up one win short of gold.

McMullen won by 9-1 major decision and 4-3 decision to reach the championship match, but lost via first-period pinfall to Caden Hulett of Platte County.

Deason had close match with Eli Rocha in the final, but could not close the 3-1 gap late to repeat as district champion after winning the 113-pound title a season ago.

Smithville landed one spot behind Kearney in the team race with two wrestlers who took first in their bracket.

“I felt like we could be in the hunt for a title today, but we had a few matches not go the way we expected,” Smithville head coach Taylor Middleton said. “I knew there were three or four of the teams who would be in the hunt there, mixing it up.”

“It’s always great to win a district title,” McClain said. “It feels good. It feels good to be out here with the team. I’m grateful for the opportunity in this crazy year.”

Hutchcraft started his high school wrestling career on the same elite path that McClain did as the freshman entered the tournament with a 34-4 record before picking up a pinfall and 1-0 decision victory.

“I was able to keep that finals match really, really close and just hold good position,” Hutchraft said of his championship win.

Boone picked up a 7-3 decision over Trenden Rodgers of Kearney in the semifinals, but could not stick with Rylan Mansfield of Fort Osage in a loss by 8-1 decision.

Brown won his semifinal against Drake Lacina of Platte County with a 5-4 decision, but was unable to get much done during a 2-0 decision loss against Jeremiah Phillips of Fort Osage in the final.

Crim beat Keanu Sua of Van Horn by 7-4 decision before his tiebreaker loss to Zach Olson of Kearney in the final.