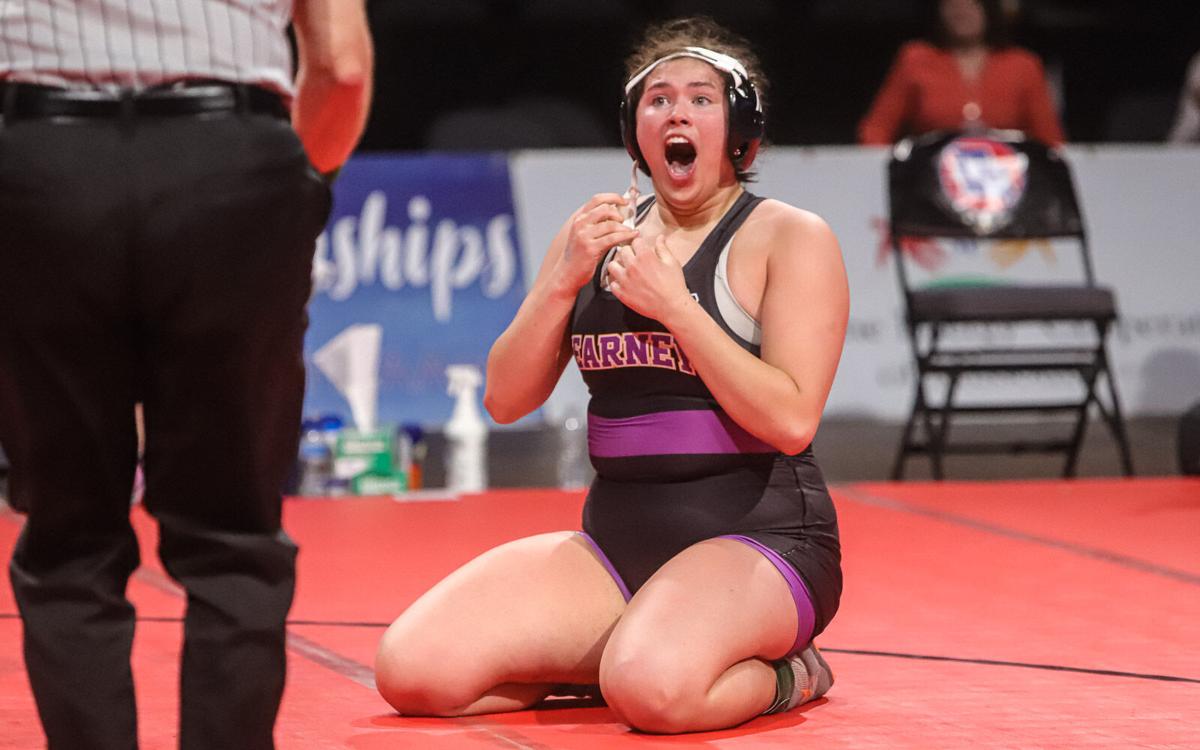 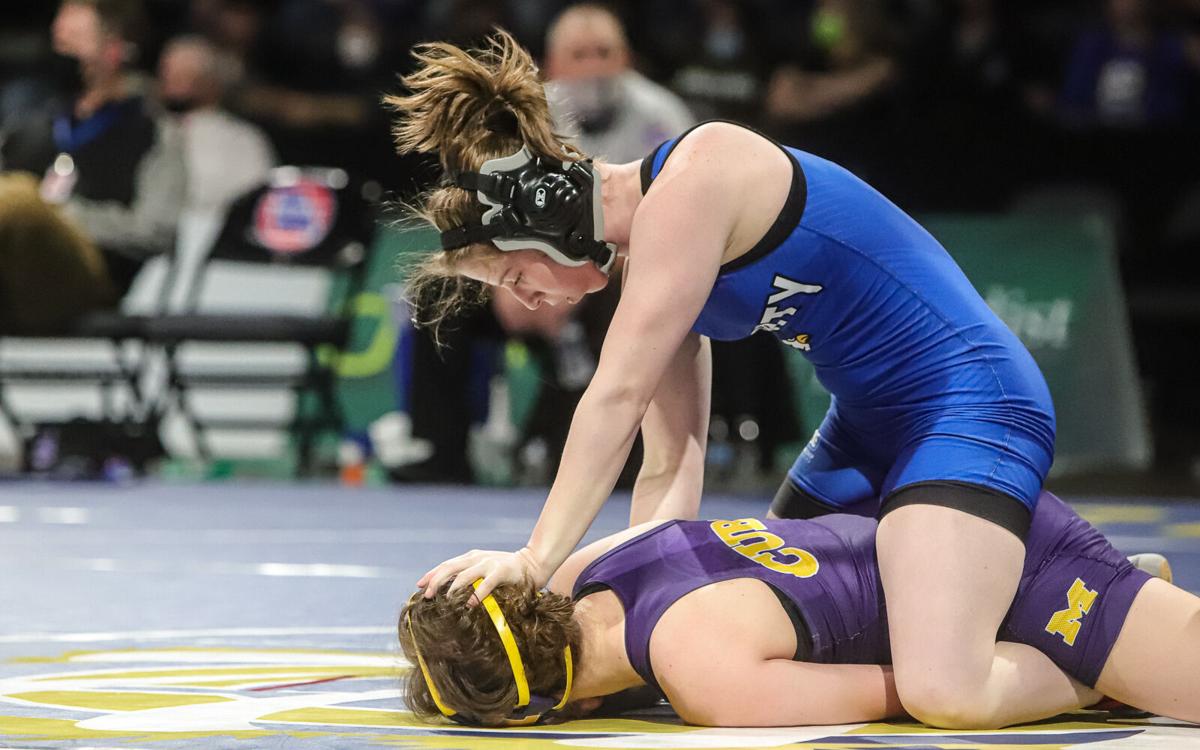 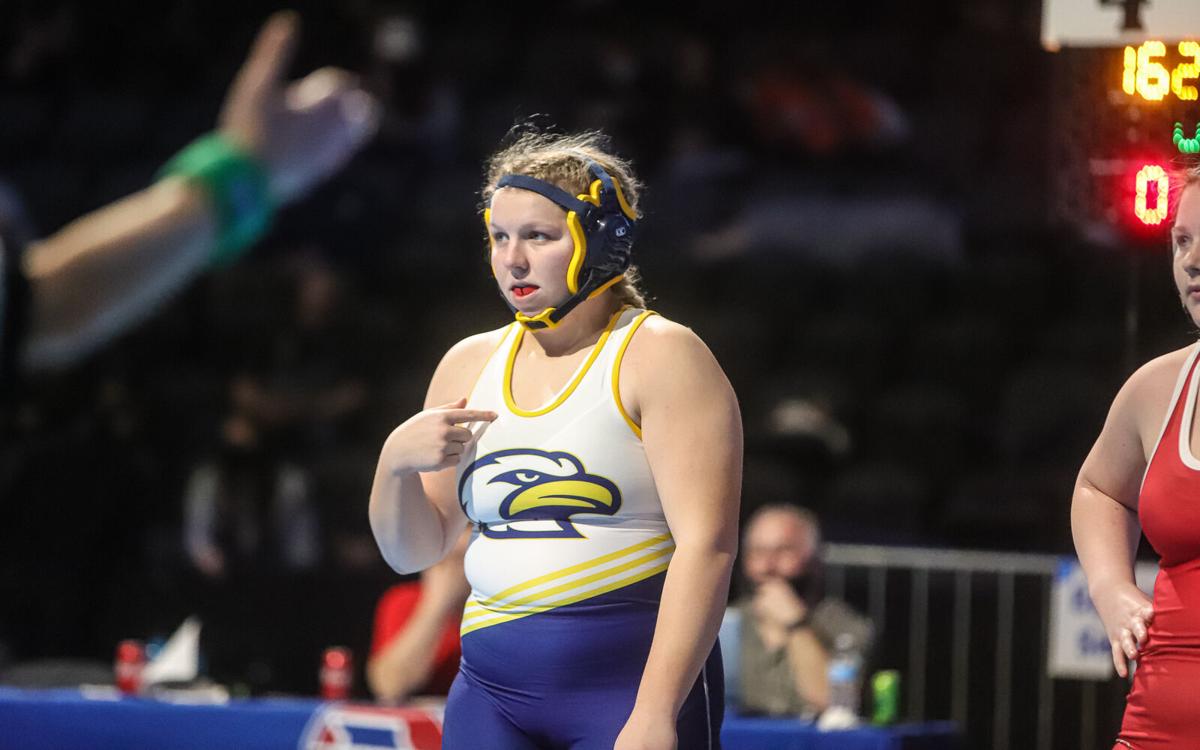 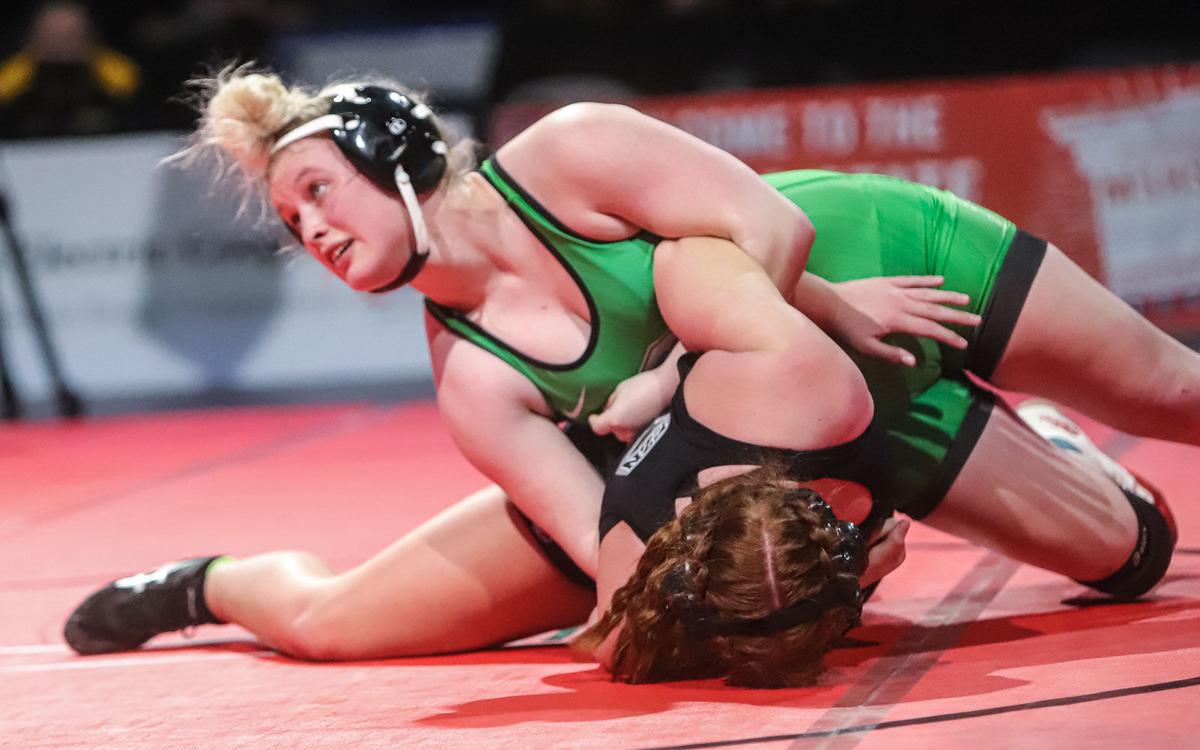 INDEPENDENCE — Of eight locals competitors who advanced to the girls state tournament, two walked away with state medals, including a 3-time state champion.

Cole’s three-peat was not picture perfect all the way through her high school career. She actually lost the district final during the inaugural girls wrestling season. She also had a late season defeat against Kiara Boldridge of William Chrisman during her junior season and again in the sectional finals this year.

Cole wouldn’t get a chance at the ultimate battle with her high school rival as Boldridge lost to Kyla Cornine of Tipton in the semifinals.

It wasn’t exactly an upset though.

Cornine entered state with just one loss on her resume. She also overpowered Cole in the early going of their finals match. The two-time defending state champion found herself trailing by 7-0 against Cornine as they advanced to the middle of the second round.

Showing the poise of a competitor that has been there twice before, Cole remained calm as she waited for her opening.

“The best thing I can do in those situations is look to my coaches,” Cole said. “They’re looking back at me like, ‘Girl, you got this.’ It’s the ultimate reset.”

Cornine had successfully mounted Cole twice before but a third attempt allowed Cole to slide underneath and flip Cornine to her back.

Seconds later, the upset bid was history and Cole smiled as she flashed three fingers to the crowd at Cable Dahmer Arena in Independence.

“It felt amazing,” Cole said. “I couldn’t have asked for anything more. It’s honestly just an honor to be able to pull something like this off as a third-year wrestler.”

Despite the deficit before the win-it-all pinfall, Kearney head coach Nick Ward said he wasn’t concerned with Cole pulling the match out.

“I tapped assistant coach (Bryant) Hummel on the leg and said, ‘We’re fine here. We’re fine,’” Ward said. “She’s been in these positions before.”

The trio of Cole, Ward and Hummel even joked that her matches seem to always be interesting and that she almost needed to have one loss heading into state to get her ready for situations like this.

“She made it interesting,” Hummel said. “When she won that match, she looks straight up at me and it was like this look of disbelief like, ‘Did that just happen?’”

Hummel said he knew she could pull this off all the way back during her first year wrestling when she started to pile up victories.

Even with a few slip-ups, Cole got the job done and remains the only 235-pound champion in Missouri girls wrestling history.

Jaden Breeden headed into the state tournament undefeated, but she was also on a collision course with undefeated, two-time defending state champion Faith Cole of Lafayette (Wildwood). Breeden hoped to last past the first round of their semifinal match, but Cole closed it out with a pinfall at the 1:52 mark.

“I was expecting to have a good run with her but she’s so good and so experienced,” Breeden said. “It was a tough match for me.”

Breeden finished off her stellar freshman campaign with a 9-1 major decision over Abigail Jastal of Monet. She also earned 4-1 decision over Makayla Mallatt of Butler in the quarterfinals.

She hopes to make it back with her twin sister Julia, who finished just short of qualifying at sectionals.

Liberty assistant coach Bret Marshall said that she responded really well to her first loss and expects both Breedens to make strides heading into next season.

“I’d look for those twins to come back next year and have a really strong sophomore season,” Marshall said.

Daisy Rapp (127) lost her opening match against Lily Steigerwald of Francis Howell North. She came back in the consolation round and earned a 6-4 sudden victory of Rylee Caswell of Fulton. She wasn’t able to keep herself going on the backside of the bracket after falling by 6-0 decision against Eve Herlyn of Park Hill.

The Eagles advanced four competitors to the state tournament after only having one advance to the event a season ago with Erma Williams, who also became Liberty North’s first district champion from either program.

Grundy was the lone competitor to pick up a victory at the state tournament. She slid into the consolation bracket after getting pinned by Jada Watson of Buffalo early in the third-period of the first round.

Grundy responded with a pinfall victory of her own when she beat Karli McFarland of Central (Park Hills) in the middle of the second period. Her state experience concluded with a pinfall loss to Maggie Myracle of St. Genevieve in the consolation semifinals.

Sanchez-Hernandez (102) lost her first state match by 4-2 sudden victory against Julia Donnelly of Washington. Her high school wrestling career ended with a 7-2 decision loss against Jasmine Alcantara of Raytown South. Sanchez-Hernandez advanced to state just two years after picking up the sport.

Williams (151) lost by 4-0 decision in her opening match against Olivia Chapman of Eldon. She got off to a slow start against Abby Sader of Knob Noster, who earned the pinfall victory over Williams less than a minute into the match.

Emily Knight won her first-round match over Carleigh Jones of Fort Zumwalt North with a second-period pinfall. Knight ended up getting pinned by Josette Partney of Lafayette (Wildwood). She went to the wire with Kelsey Burden of Knob Noster in the consolation second round, but ultimately lost by 3-1 sudden victory.