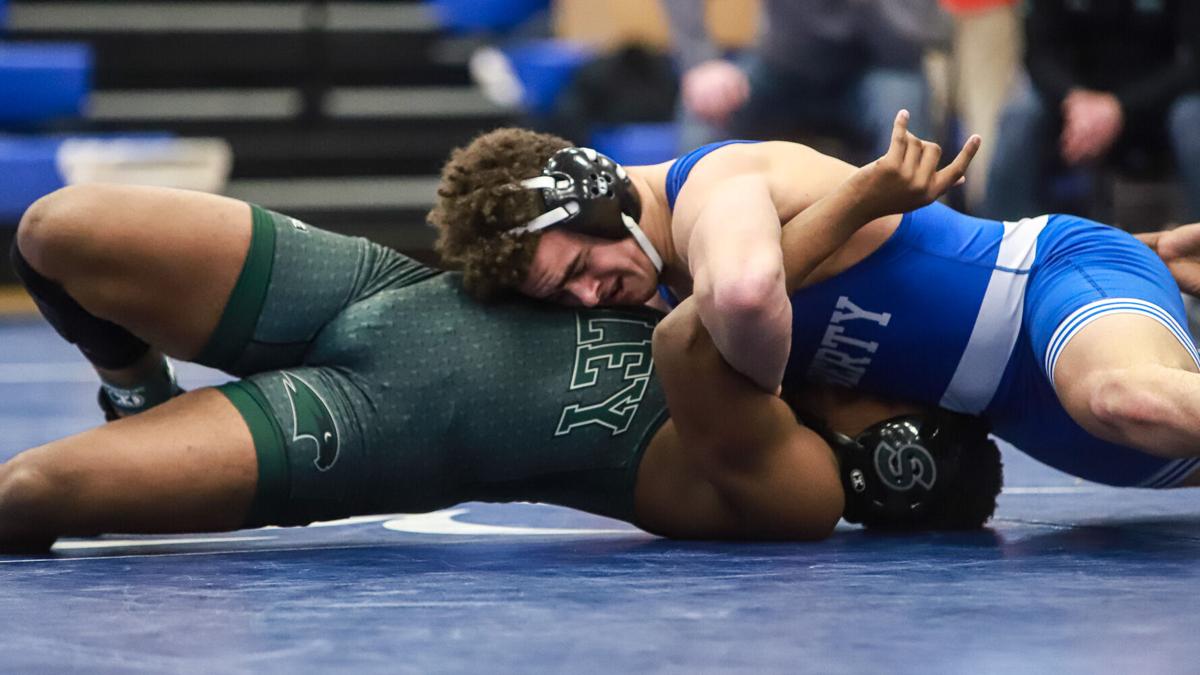 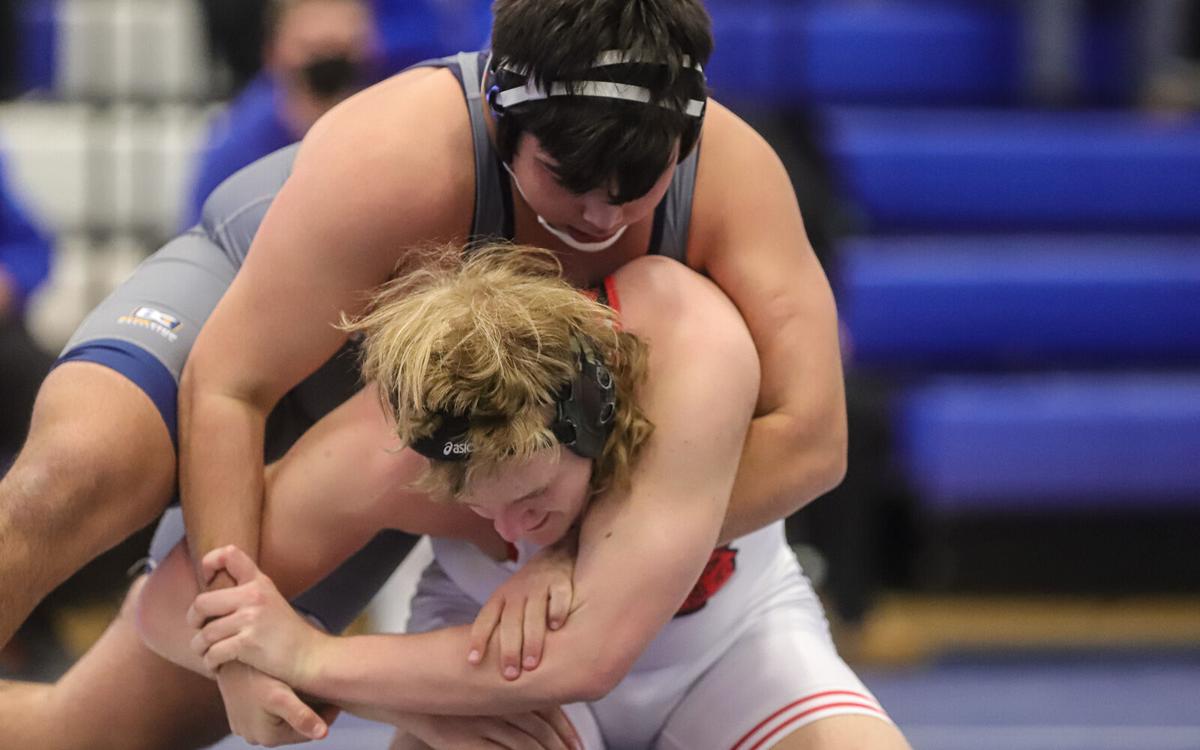 Liberty locked things up early by advancing 13 wrestlers out of 14 weight classes to the championship match.

“We got all our guys into the finals and got to prep a little bit,” Liberty head coach Dustin Brewer said. “Got to sit back and talk about what we need to do for each match, so they came out wrestled well in the finals.”

Nine of those wrestlers picked up another victory to become individual district champions.

Hunter Taylor (106) won his first match by 18-1 tech fall before securing a second-period pinfall over Michael Domino of Liberty North in the championship match.

Christopher Coates (120) took a 3-1 decision in the semifinals. He followed up with his second pinfall victory of the day when he took down Anderson Lipp of Staley.

Easton Hilton (126) earned a 9-0 major decision win over Jacob Windsor of Staley in their finals clash. But that result, even with adding a pinfall just a minute into his semifinal, left Hilton still feeling like he could have done better.

“My goal at sectionals is to score more points,” Hilton said. “I feel like I didn’t score enough points in my finals match, but I’ll wrestle again in two weeks probably.”

Hilton’s need to improve even the wins stems from his experience settling for third place at state last year after losing a 9-7 sudden victory to Santino Robinson of Christian Brothers College in the semifinals.

“I just knew I was going to win so I wouldn’t put the work in sometimes,” he said. “I think this year I’ve put in the time, I’ve put in the effort. I’ve put in everything possible to put myself in the best position to win.”

Jude Axsom (132) won all three of his matches by decision, but his finals match was much closer than the 10-5 and 10-3 decisions that came before. Axsom pulled out a 5-4 victory over Austin Marrah of Staley.

Kage Lenger (138) earned first-period pinfall victories in both of his matches, including his championship win over Dylan Alft of Liberty North a minute into their match.

“I knew Dai’Mont is a solid kid,” Williams said. “He’s a freshman and pretty solid for a freshman. I knew I was going to have to wrestle just like any other match. I approached it like that and just took care of business.”

Williams hopes to improve from his second-place finish last year at state when he lost to Aidan Johnson of Staley by 3-1 sudden victory in the 170-pound state final, a result that was the reverse of their district finals match from two weeks prior.

“I look back on last year’s performance and know that I can improve,” Williams said. “This year is (winning) basically expected if we’re being honest, so I just got to keep doing what I’m doing and get the job done.”

Jack Horn (195) picked up two first-period pinfall victories to reach the finals. Horn held on for a 3-2 decision over Chris Bizzle of Park Hill in his finals.

Jeremiah Cabuyaban (285) made quick work of his matches as he secured two first-period pinfalls on his way to a district title.

Rathjen earned two tech fall wins but faced a 4-2 loss to Kal Miller of Park Hill in the final, a repeat of their match in last year’s 145-pound district final where Miller won 5-1.

Halter picked up a 18-5 major decision and a pinfall win in the semifinals, but David Brooks of Staley secured a pinfall win over him in the final seconds of their championship match.

Lynn picked up two early pinfall victories to open the tournament, but his full-time bout with Paul Hernandez of Oak Park landed in his opponent’s favor in a 7-4 decision for Hernandez.

Brewer left the tournament very pleased with his team’s performance. Still, he had a few moments that his wrestlers could work on to make sure his guys are just as dominant at sectionals.

“We had a few losses that I think we’ve got to go back and make some adjustments, try to get those back in a couple weeks,” he said. “But overall, I thought we wrestled really well.”

The Eagles wrestled their way up the leaderboard to third place with their 130 points, staying well ahead of Park Hill’s 90 points after the Trojans finished second at districts a season ago.

“I felt pretty good in a couple areas and in some other area, we need to go to work,” Liberty North head coach Lance Moore said. “We got 12 out of 14 through (districts), which I felt was one of the hardest districts in the state of Missouri. So we‘re blessed that we have another two weeks to get better, go back into the room and fix some things.”

Chas Donnici (220) became the boys team’s first district champion in program history. Donnici picked up two pinfall victories, including a win over Logan Lasater of Park Hill midway through the second-period of the finals.

Donnici said he felt good about his performance and his main goal at this point is to just stay focused on the match at hand.

“I had some mistakes here and there, but I felt like at the end of the day I was better than the other guys (in his matches),” Donnici said.

Michael Domino (106) settled for second placeafter getting pinned by Hunter Taylor of Liberty in the final. Domino reached the final after a pinfall win in his first match and 11-0 decision in the semifinal.

This year’s district tournament looked different than the event has in recent years as a precaution related to the COVID-19 pandemic. The Missouri State High School Activities Association created a smaller field for the event by adding a sectionals competition in between districts and the state tournament.

Liberty and Liberty North wrestlers who placed in the top four at districts will move on to the sectionals competition Saturday, Feb. 27 at Staley High School.

The top three wrestlers in each weight class at sectionals will move on to the Missouri Class 4 state tournament March 13 at Cable Dahmer Arena in Independence.