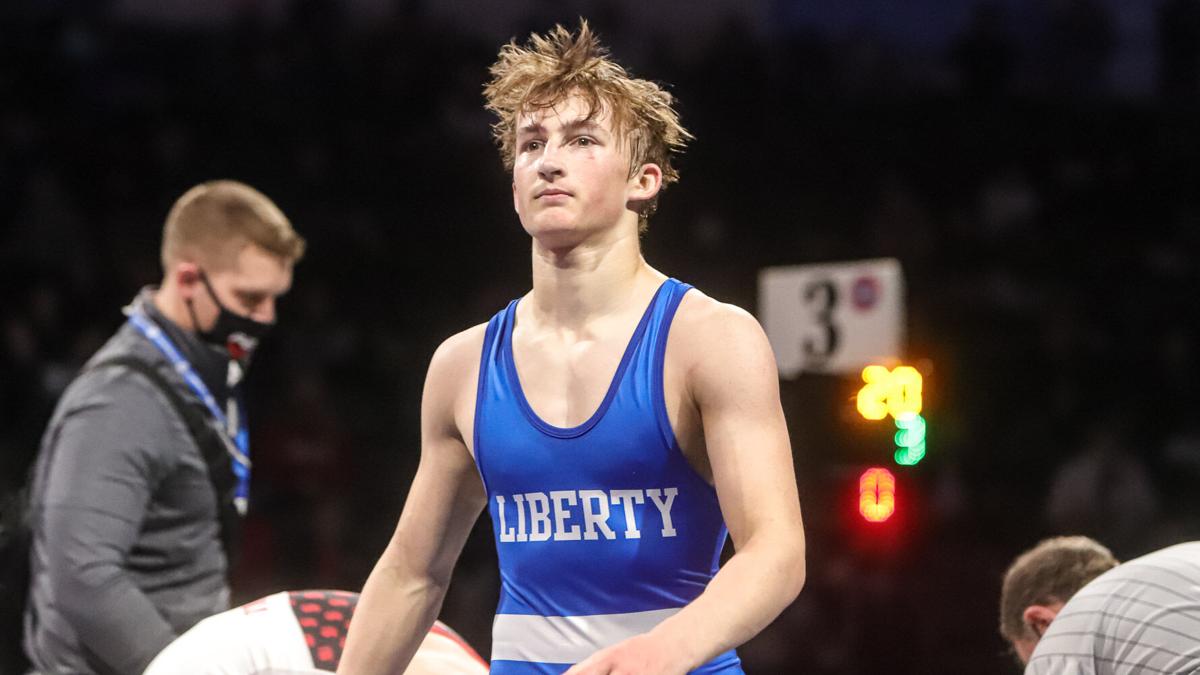 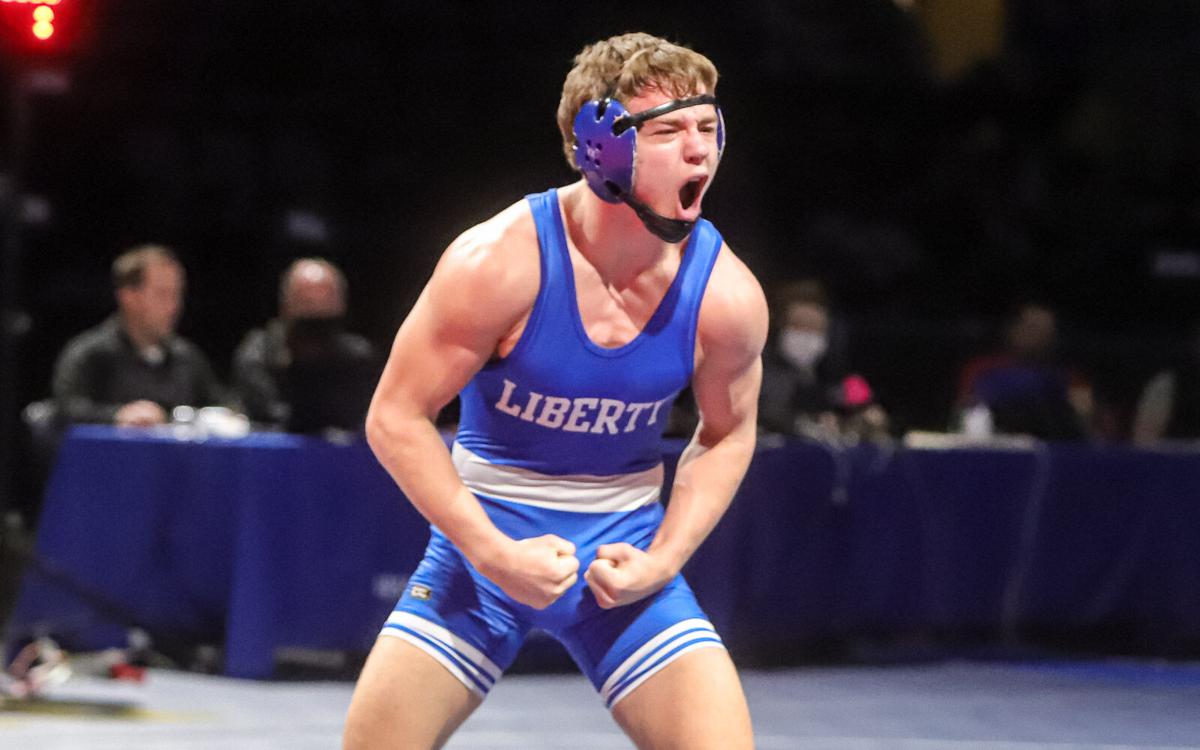 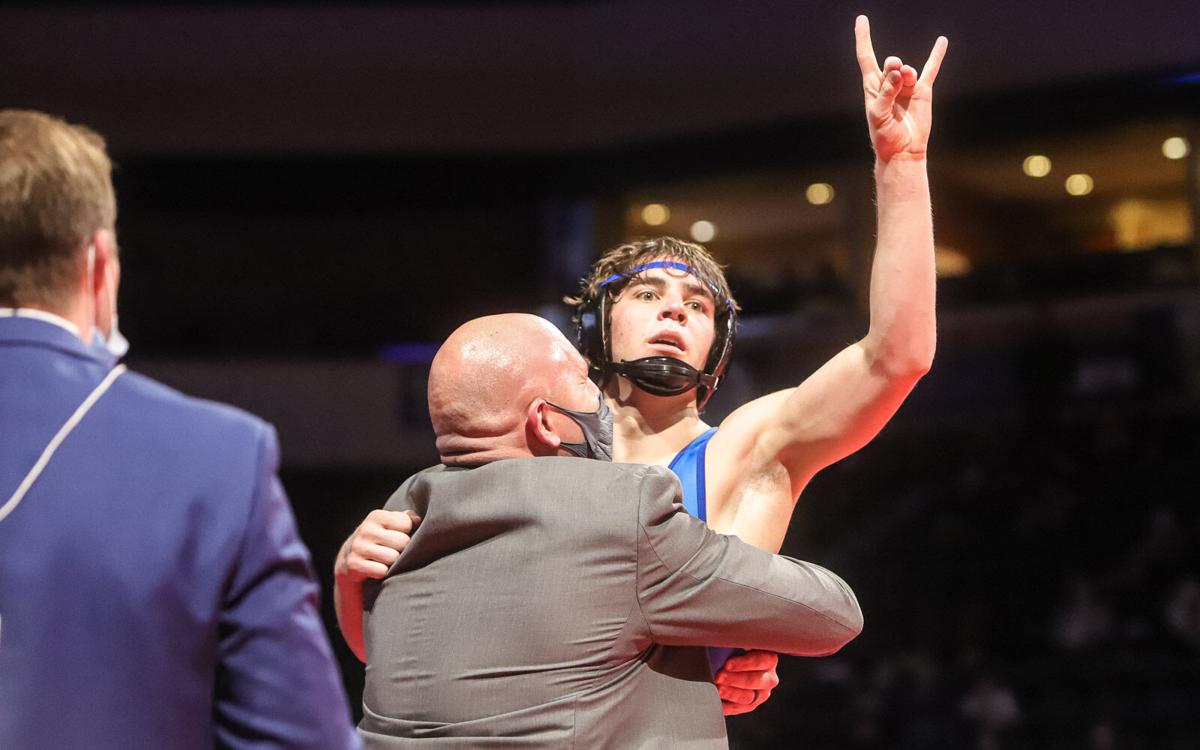 Liberty’s Kage Lenger throws up the “Too Sweet” hand gesture as assistant coach Kellen Laws lifts him off the ground during the Missouri Class 4 boys wrestling state tournament Saturday, March 13 at Cable Dahmer Arena in Independence. 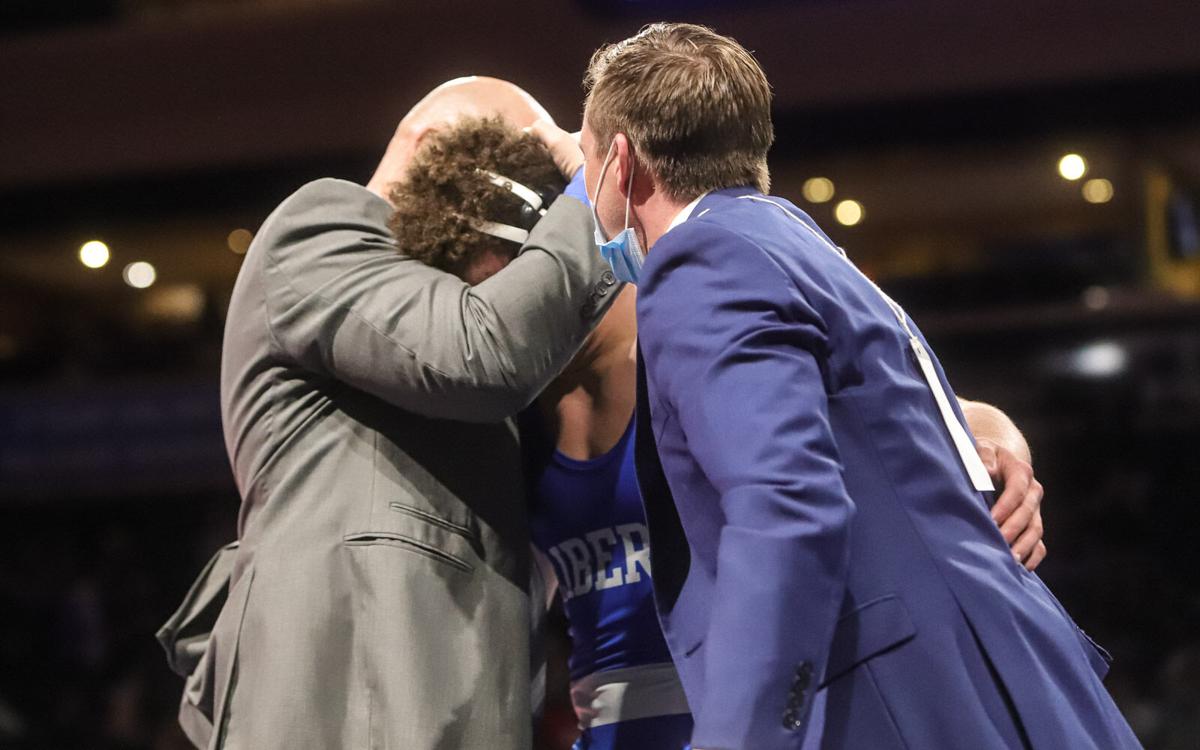 Liberty’s Kage Lenger throws up the “Too Sweet” hand gesture as assistant coach Kellen Laws lifts him off the ground during the Missouri Class 4 boys wrestling state tournament Saturday, March 13 at Cable Dahmer Arena in Independence.

Liberty boys wrestling’s “Wolfpack” turned the page on their WCW references and opened the Book of Austin 3:16.

No matter which late '90s professional wrestling references they use for inspiration, the final result continues to be a "stone-cold stunner" for the rest of the field in Missouri’s biggest class.

Liberty won its second straight state title with 226 points as 12 of its 13 state qualifiers left with medals. The Blue Jays have been establishing themselves as a yearly power under head coach Dustin Brewer, with the team earning second-place in 2019 during his third year with the program.

Liberty assistant coach Kellen Laws tweeted out #ArriveRaiseHellLeave on his Twitter account the morning of the state tournament, along with a gif of former WWE superstar Stone Cold Steve Austin marching to the ring. He said last year’s nWo gimmick worked great, but they wanted to have something a little different heading into this year’s state tournament.

“Coach Brewer used to come out to ‘Shattered Glass’ when he wrestled,” Laws said, placing the Stone Cold Steve Austin connection onto Brewer’s use of the pro wrestler’s theme music and not Laws’ own resemblance to the “Attitude Era” fan favorite.

Laws said the team executed that exact game plan of showing up, dominating the competition and leaving Cable Dahmer Arena in Independence with another state title.

“It became something where we are just here to whoop some (expletive),” Laws said. “That was the goal, it was everything we wanted to do in those three statements.”

As for having an attitude though, he said the team leaves most of that in the wrestling room and on social media.

“They don’t showboat or put anything out there in a negative light,” Laws said.

Each of the state champions showcased that mentality of blending aggression, passion and restraint.

It all starts with the senior leadership exuded by Lenger. He’s shown flash as a cross country runner with the attention-stealing shades and he’s known for sporting a cowboy hat whenever the officials will allow him to do so.

But anybody who has talked with him knows that he’s a very humble and down-to-earth personality. He completed one of his biggest individual goals after a four-year climb, yet his excitement rested almost entirely on the accomplishments of teammates.

“It’s nice to add that (state championship medal), but it’s not about me,” Lenger said. “It’s about the whole team.”

That mentality has trickled down to the youngest competitors on the team.

Checking the heart rate of Coates after his championship victory might not have registered a change for the freshman grappler. Coates learned quickly in his first year that this type of finish is the expectation and Blue Jays must work hard to get there and beyond.

“It feels good, but it's not my biggest goal,” Coates said. “I have bigger goals than that. It's one stepping stone to the path that I want to have.”

Dutton may have felt like he had the most to prove despite his victory being his second straight individual state title. Dutton had faced his opponent Ethen Miller of Park Hill on three different occasions this season before their finals match. The Liberty junior still remembers losing to Miller during districts of his freshman campaign.

Dutton was ecstatic when he pulled off his 3-1 sudden victory to become a repeat state champion alongside his teams back-to-back titles.

“It’s awesome,” Dutton said. “I love it. I love all these guys. They are all my family and my brothers. We got a great support system.”

That support system has been key in getting through the low moments on the way to the high points.

Williams was going for his first state title after finishing in second place last year. Even more, he was dedicating his performance to his father Wentric Williams II, who died on Sept. 26, 2020.

Williams led an undefeated Liberty Blue Jays team at running back when he experienced that loss. He pushed through the season, injuries and COVID-19 protocols that added an extra postseason tournament on a path that his father always told him was expected.

Williams lived up to expectations as he dominated his finals match with Tommy Hagan of Lafayette in a 7-2 decision victory for the 182-pound state title.

Williams burst into tears when the match ended and his name was called out as the victor, although he said his mind really started to focus on the significance of the moment when he was in the tunnel waiting to run onto the mat.

Brewer said it was hard to not get emotional after Williams completed the goal of becoming a state champion.

“He’s such a great kid, he really works hard,” Brewer said. “The adversity he had to go through this year, no kid should have to go through that. When he won, it brought tears to my eyes. Just talking about it makes me want to cry, but I’m just so happy for him.”

Brewer said he’s excited to watch Williams complete his career next year and hopefully finish with a bang.

Part of that would include the team earning its third straight state title as a team. Brewer sees that as a real possibility for his returners even after losing Lenger and two other outgoing seniors from the 2021 class.

“I think we’re still going to have a tough team,” Brewer said. “We want to push this offseason and make some gains. Some of the guys who maybe didn’t get their goal this year, we want them to come back and get their goal next year.”