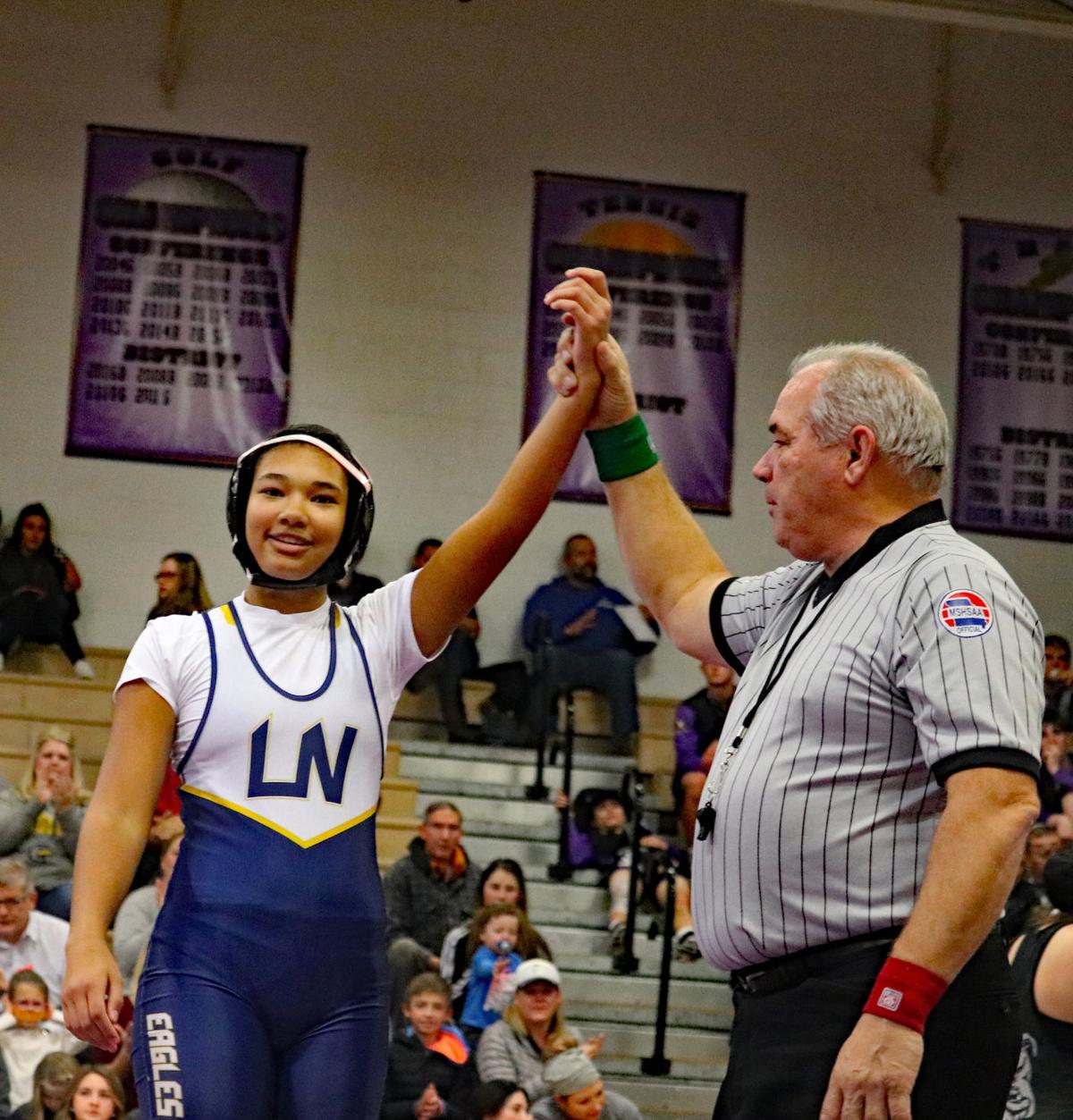 Liberty North junior Erma Williams helped the Eagles to a win Dec. 3, in their home opener against Kearney. 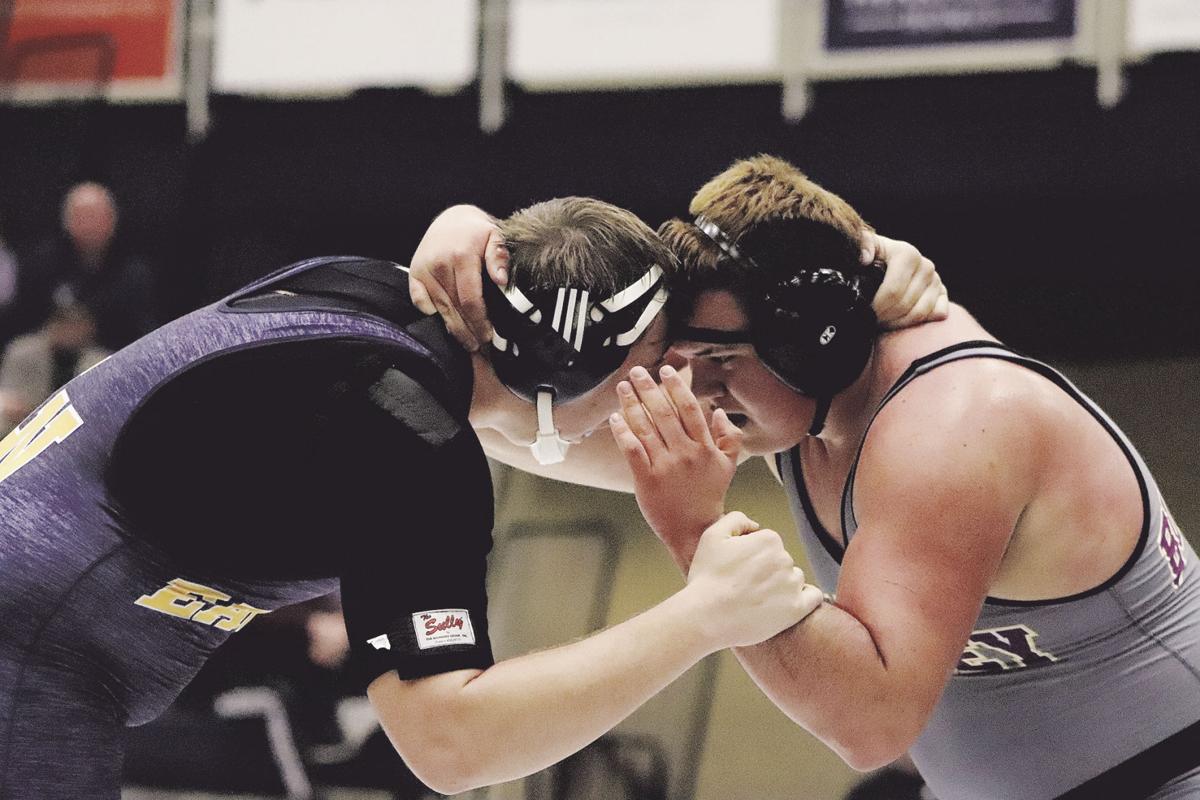 The Liberty North Eagles and the Kearney Bulldogs faced off Dec. 3, in the Eagles’ home opener for a season with a new head coach.

Liberty North junior Erma Williams helped the Eagles to a win Dec. 3, in their home opener against Kearney.

The Liberty North Eagles and the Kearney Bulldogs faced off Dec. 3, in the Eagles’ home opener for a season with a new head coach.

LIBERTY — The Liberty North girls wrestling team had its season home opener for the official second year of the program Dec. 3. They came out with a victory over the Kearney Bulldogs 33-30. With some returners on the team and many new girls joining the program, head coach Laurel Shogar looks on the growth of the team as a whole.

“It is super awesome to see the influence the returning girls have had on the new girls as well as the leadership roles they have taken. Our new girls have been stepping up and willing to make sacrifices that they have not made and on things they didn’t expect,” Shoger said.

One of the few returners is junior wrestler Erma Williams, who challenged several Kearney wrestlers in the district last year. Points were gained for Liberty North when Williams pinned Kearney wrestler Danica Green with 50 seconds left in the first period.

“Wrestling Kearney last year gave us what to expect tonight and how to prepare for that. It also really helped that Coach Shogar knew their wrestling style,” she said.

Williams has been training with the Eagles Club and Liberty North, starting in seventh grade. As more girls have joined the wrestling program, Williams has provided both leadership and peer support to her teammates.

“When I was in sixth grade, I saw my brother wrestling and I thought that would be fun, so I tried out in seventh grade. I did the wrestling club for two years and I joined middle school wrestling in eighth grade,” Williams said.

Along with a win from Williams on Dec. 3, first-time wrestler Kate Shriver came in with the second win of the night. Following a tense close match, Shriver emerged victorious with a 9-7 against Kearney wrestler Hailey Ramero.

“As the meet went on, I was really scared and nervous. I just had to think, ‘Don’t give up, pin her. The faster you pin her, the faster you are done, and just keep trying every time you go down,’” Shriver said.

After the close victory against the Kearney Bulldogs, the Eagles girls wrestling team looks ahead to a tournament this weekend at St. Joseph Central. Following that tournament, their next home matchup will be at 5:30 p.m. Tuesday, Dec. 17, against Lee’s Summit and Raymore Peculiar.

“Moving forward, we will just use the information we will get from here. We will always learn from every single match that we didn’t know from before but now have learned. Even when we lose, we still find the benefits and figure out how you can improve, so when we go to those tournaments, we can do even better and better,” Shoger said.

The Liberty North boys wrestling team competed in its first dual matchup on Dec. 3. They fell short to the Kearney Bulldogs 15-58 in the end.

First-year head coach Lance Moore said it was expected the team would have areas it would need to improve on.

“We just have to hit the grindstone tomorrow and gotta be coachable, respond and fix things that we messed up on,” Moore said.

Moore is new to coaching wrestling at Liberty North after head coach T.J. Goeglein resigned and moved to be athletic director at St. Joseph Central High School. Moore was an assistant wrestling coach at Kearney for 10 years before that.

While the Liberty North team lost many seniors last year, the team is gaining confidence with emerging leaders.

“A wise man once told me, you’re only going to be as good as the seniors want to be. They want to be good, so hopefully that will be able to propel us and take us to places where Liberty North wrestling has not been yet,” Moore said.

One of those leaders is senior Andrew Stephenson, who gained the first win of the night. Stephenson pinned Zack Olson from Kearney with 29 seconds remaining in the second period.

“There is always added pressure when you are the first match of the season, but I think I just took it and tried to get our team a good head start and try to put us in the right mindset to wrestle Kearney tonight,” Stephenson said.

Not far behind Stephenson’s win, sophomore Drew Evans won by default with a score of 8-6. Evans went back and forth with repeat competitor Trenden Rogers. While Evans lost both matches against Rogers last year, Evans came back with a win.

“Tonight’s win was really good because last year I got beat by this guy twice, so for me finally beating him, it felt really good,” he said.

The Eagles won’t have to think too hard on this loss as their season continues. Up next, the team takes on Shawnee Mission Northwest on the road Saturday, Dec. 14.

With new leadership and training regimen for the Liberty North boys wrestling team, Moore teaches the team to not just focus on the now but focus on the future.

“It’s not how you wrestle day one, it’s how you finish the season in February. That’s our main goal; keep getting better and better, hit our peak in February when districts and state happen,” the coach said.